Two years ago in August I opened my garden for the CT Horticultural Society's version of Open Days.  For months I mulched, watered, pinched, pruned and planted so that everything would look extra spiffy.  And it did.  In fact, even my obsessed garden friends confessed that they had never seen my garden look better.  One of my obsessed garden friends is also an obsessed (and very talented) photographer.  While she was visiting my garden that day she took pictures-many beautiful pictures.  For Christmas she used the pictures to create a calendar that I proudly hung in my office.  At the end of that year I cut the photos out of the calendar and arranged some of them on a bulletin board behind my desk to cheer me through the winter months and remind me what my garden could look like if I decided that having a life outside gardening was unimportant. 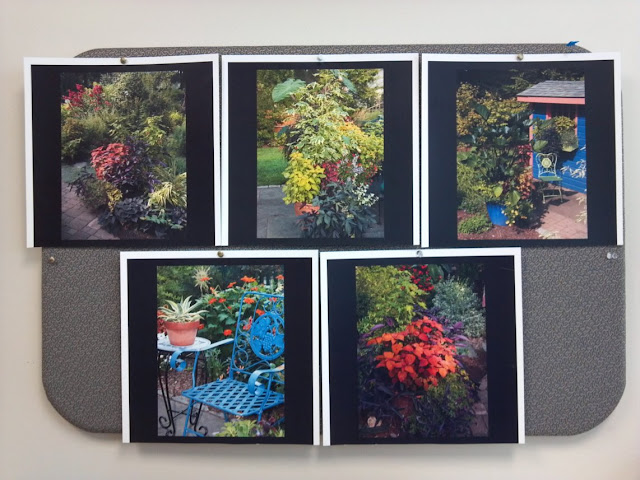 Visitors and co-workers often asked about the pictures and seemed impressed when they learned they were taken in my garden.  But I guess I wasn't all that surprised when I arrived at work yesterday and discovered a blank board.  After all, I work with a plethora of professional pranksters-what is commonly refered to as a "tough crowd".  But which poker faced pilferer was the culprit and why?  Where were the yuks in stealing my garden pictures?

It didn't take long for the culprit to come forward.  I wasn't surprised at who but what took me totally by surprise was why.  I was handed a beat up old JC Penney gift box secured by tape and told I could open it but if I chose to I would have to replace my garden pictures with the contents.  Oh really!  Would you trust the person who had reflective "Nifty at 50" decals installed on the back of your SUV for your 50th birthday?  Or who had stuffed your office with hundreds of leftover trade show balloons?  How stupid could I be?  So I refused.  Ha!  Na na nee na na-you aren't going to pull one over on me again!

A crowd was now starting to gather and I was strongly encouraged to reconsider.  In a weak moment I finally did.  Inside the box wrapped in tissue paper was a quilt of my garden pictures printed on fabric.  It was lovely.  I was told it was handmade by the culprit's mother-in-law at his request.  I was speechless (not a common occurrence).  Naturally I thanked him.  And although I have to admit I am checking behind doors, not leaving my car keys around and waiting for the other shoe to drop, I did replace the garden pictures with the quilt.  Wouldn't you? 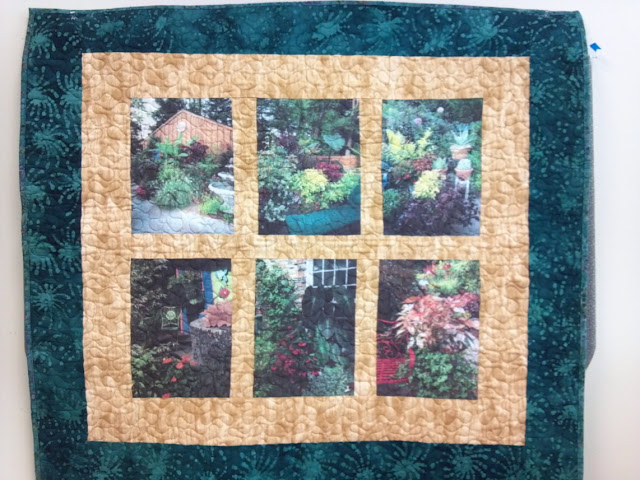