When designing mixed containers I always start with one centerpiece plant, often referred to by container gardening aficionados as the "thriller".  List topping thriller choices in my containers include bananas, elephant ears, cannas, fountain grasses, and acalphas.  If I was asked to choose a favorite though it would have to be elephant ears-Colocasias and Alocasias.  Despite their popularity in my garden, even the more common varieties of Colocasia like 'Black Magic' and 'Illustris' can often be difficult to find, and expensive.  Unfortunately I haven't had much luck wintering them over so I always grab them when I see them in the spring and buy more than I think I'll need (as if it's possible to ever have more elephant ears than one needs).

A couple of years ago I was strolling through my friend Monique's fabulous garden with a glass of wine when I was stopped dead in my tracks by a huge gorgeous mass of glossy deep purple foliage undulating in the summer afternoon breeze.  Like a beacon is was guiding me across the garden, beckoning me to come hither.  Even from a distance I could tell it wasn't 'Black Magic'-but what was it?  I just had to know.  And more importantly where could I get one?

As it turned out, it was a variety of Colocasia I had never heard of called 'Diamond Head'.  Monique found it at some obscure back road garden center she happened to pass on the way to somewhere else.  Believe it or not but we often find unusual plants by stopping at off the beaten track roadside stands and seasonal greenhouses.  Unfortunately she was only able to get one plant that year.  Last year I was finally able to find it for sale.  In mid May I purchased a teeny plant in a 4" pot and planted it in a mixed container along my back border.  The picture below was taken June 30th.  It was already a star. 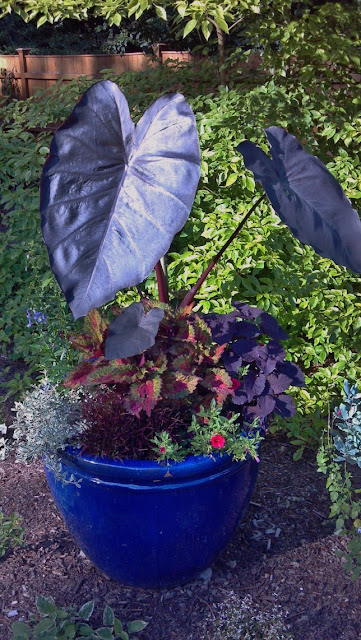 On October 6th, despite taking a bit of a hit from Hurricane Irene at the end of August, the plant was a monster and still going strong.  A definite winner!  In late fall, I dug it out of the pot, tossed it in a plastic bag in the basement for the winter, watered sparingly and crossed my fingers.  By some stroke of luck it survived to grace my garden another year!  So...we have luscious bold foliage and season long interest on a focal point plant-star qualities in any garden.  Just grow it! 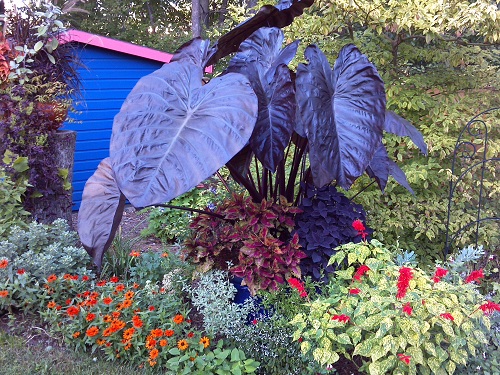