Score one for Humanity 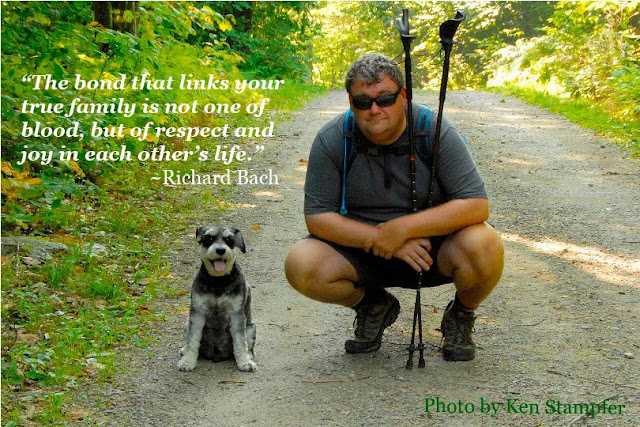 Last year Tom Ryan published a fabulous book called "Following Atticus" about his remarkable adventures hiking in the White Mountains of New Hampshire with his miniature schnauzer, Atticus M. Finch.  If you grew up Irish Catholic in the Boston area, have ever been owned by a miniature schnauzer, or have spent any time at all "peak bagging" in the Whites, I highly recommend the book.  Even if you haven't I highly recommend this book.

Last fall I attended one of Tom's book signings and had the chance to speak with him for a bit.  I also follow his blog and his Facebook page and we occasionally exchange messages.  A few weeks ago I became aware of an elderly miniature schnauzer in need of rescue in New Jersey.  His name was Will and at age fifteen the poor guy had been dumped in a kill shelter because his family could no longer care for him.  My heart broke.  Although I am no longer able, for many years I used to volunteer with schnauzer rescue groups.  I understand that circumstances sometimes get out of control for people but I absolutely hate to see old dogs end up in rescue.  Hate it!

Anyway, another friend from my old rescue days saw the story on my Facebook wall and decided to repost it to the Following Atticus page thinking that with over 6000 followers maybe someone would want to adopt Will and give him the opportunity to out live whatever time he had left in a loving home.  Never did we expect the adoptive home would be with Tom and Atticus!  Tom is a gifted writer.  After reading his blog post this morning I just had to share.  Follow the link below to Tom's blog and read about his new adventures following Atticus and now Will.

The Adventures of Tom & Atticus: Following Will: William two weeks ago. Two weeks ago I was in Eastern Mountain Sports looking at child-carrying backpacks.   You see, Atticus and I wer...
Posted by Sue at 9:14 AM