I started writing this blog post about four years ago after I returned from a week of garden touring in Oregon and Washington. For years it's been suspended in the dreaded "draft" status. Given that I have little or nothing to offer on the gardening front right now I figured it might be a good time to resurrect and post this relic.

After drooling over plants on that trip, most of which I would have a snowball's chance in hell of growing in my own garden, I decided I wanted to walk on the wild side and try growing Tetrapanax papyrifer in my central Connecticut garden.

If you follow this blog, you know that I moved last year.  Even though the USDA zone map for Connecticut illustrates that my zone did not change, I suspect that may not be the case.  I commute about 25 miles each way to work now which is relatively close to my old garden stomping grounds and it's always consistently warmer by four to six degrees.

Below are just a few of the plants that caught my eye on that trip.  We always want what we can't have, right? When it comes to plants I'm always on the hunt for something different.

Melianthus major 'Purple Haze' was one of those plants.  Melianthus major can be purchased in some of the better greenhouses as an annual in New England in the spring but I've never seen the cultivar 'Purple Haze'. Two winters in a row I had M. major return in a pot that was stored in my detached, unheated garage.  Maybe there's hope in a cool basement because there is no hope at all outside.

A second plant I absolutely lusted after was Lobelia tupa.  Just about every garden we visited featured large, well grown specimens of Lobelia tupa.  My pictures below taken at Linda Cochran's garden and at  Far Reaches Farm in Port Townsend, WA don't do the plant justice.

Linda Cochran places Lobelia tupa on her list of top ten favorite plants.  Far Reaches lists it as zone 8a.  Both Kelly and Sue, at Far Reaches honestly didn't think I had a prayer of overwintering Lobelia tupa in central CT even with protection so I guess I'll just have to admire this one from afar.


A third plant that stopped me in my tracks because I'm a sucker for bold foliage was Tetrapanax papyrifer.  Hmmm, somewhere in my travels I vaguely remember reading that with winter protection, Tetrapanax could be grown successfully in CT.  Louis the Plant Geek grows it in Rhode Island. Rhode Island is not that far away. If Louis could grow it maybe I could too.

So in April 2013 I ordered a Tetrapanax from Plant Delights Nursery. Siting it was somewhat of a challenge.  I didn't have any room in my sunny south facing patio garden.  The south facing wall of the shed was the next best thing, but with no foundation and part sun exposure I wasn't hopeful. 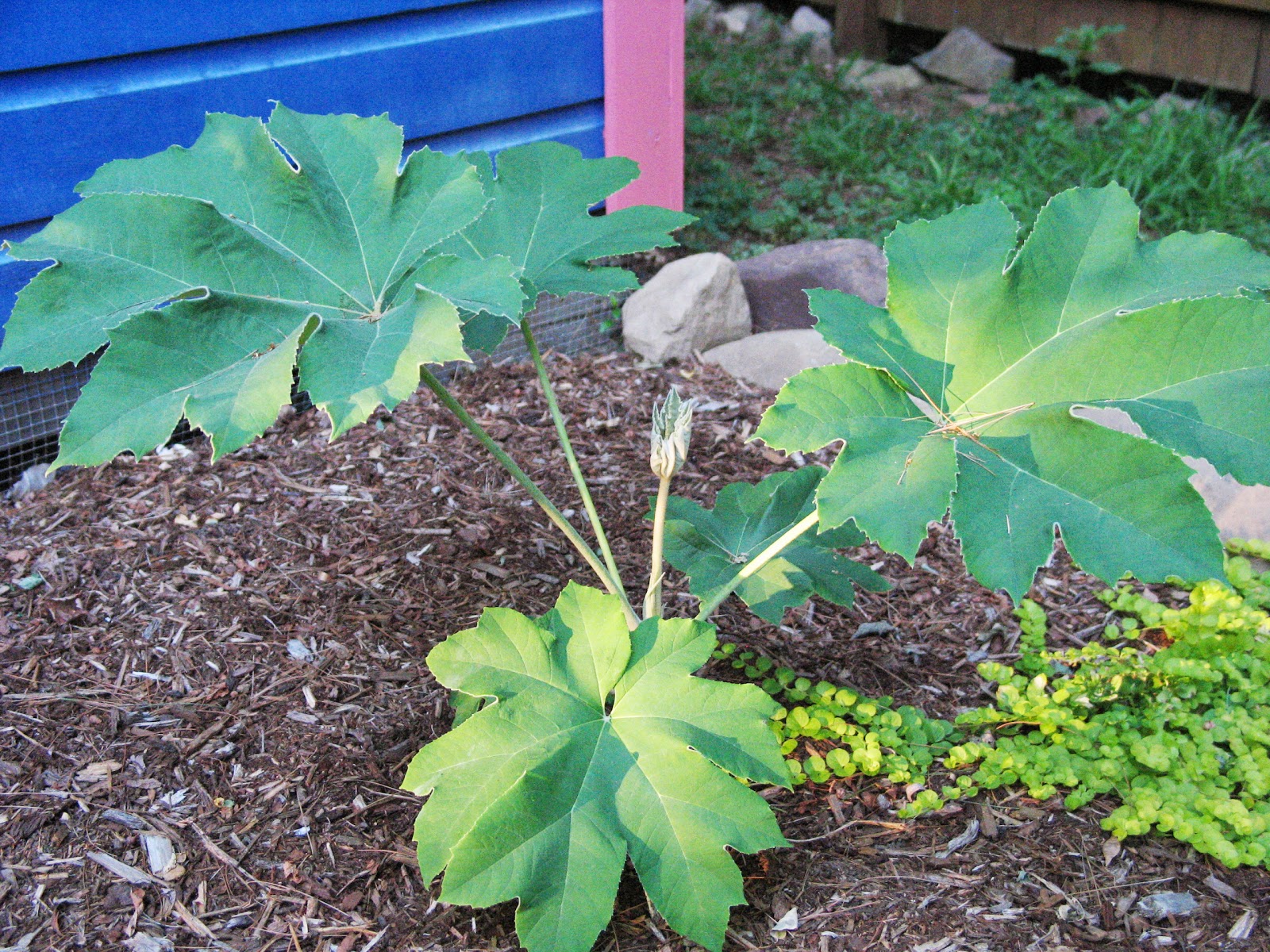 All went well the first year except I did not get around to shoring up winter protection until well into winter.

Despite my botched protection attempt, in late May of 2014 a small unfurling Tetrapanax emerged!  It had died back to the ground over the winter but was returning from the roots. Maybe Louis the Plant Geek was right.

I wasn't encouraged though.  ﻿My Tetrapanax was alive but it was acting more like a ground cover than a bold specimen plant. I suspected my garden nemesis, lack of sun was the likely culprit but in my overplanted quarter acre garden I had no better spot.


Much to my surprise, in July of 2015 it came back again but never grew much more than a about a foot.  In the fall of 2015 I didn't even bother to protect it.  At that point I knew I was moving and I knew a zone pushing plant like Tetrapanax wouldn't take a late season move-especially to a colder location.

Did my poor tetrapanax come back in 2016?  I couldn't tell you.  I moved out of my house in May, closed in July and was so overwhelmed with moving that I didn't even think to look.  I'm going to assume it did though because the 2015-2016 winter was relatively mild..

So what did I learn?

With winter protection and proper siting I believe it's possible to grow a sizable Tetrapanax papyrifer in Connecticut zone 6. The way the schedule is unfolding, I won't have a good spot for one in my current garden until fall.  Fall planting won't work for a borderline plant like Tetrapanax though so realistically I'm looking for a spring 2018 planting.

Fortunately gardeners are patient people and I'm no exception.

Email ThisBlogThis!Share to TwitterShare to FacebookShare to Pinterest
Labels: Tetrapanax

My Annual Pilgrimage to the Connecticut Flower & Garden Show

Over the weekend I attended the annual Connecticut Flower and Garden Show.  Years ago I used to eagerly mark my calendar and take time off from work to attend this show.  In recent years not so much.  But curiosity usually gets the better of me.  Curiosity and the desire to smell fresh mulch in February.


I understand the huge commitment of time and expense required to put a live landscape exhibit together and I understand the economics behind the decision a business makes as to whether to participate or not.  I greatly appreciate the time and resources spent by the businesses and organizations who choose to design and set up exhibits at the show.

I also understand that it's the vendors and sponsors who provide the bulk of the financial support that allows the show to exist. Unfortunately many of the vendors have nothing to do with gardening and just don't interest me.  Quite a few are annoying, predatory "infomercial" types.  I had to be down right rude this year to avoid some aggressive carnival like sales tactics.  For me this takes away from the show.

Maybe I'd be more tolerant of the vendor situation if there were more landscapes to divert my attention. Over the years, the number of garden exhibits seems to have shrunk and the number of non garden type vendors seems to grown.  Could this be a result of pure economics or some other factor?  I'm not going to pretend to know.


All of the above photos are from Aquascapes of CT display.  Year after year, they have been a mainstay at the show and have always had one of the more elaborate pond displays.  Someone must have declared open season on pond contractors at the show this year.  Aquascapes was the only one.

She shed schmee shed...give me one of these bar sheds!


Excuse the crappy cell phone photo.  I had problems getting a good picture of the inside.  The décor was a bit masculine for my tastes but as long as the bar is well stocked...

Swaths of simple white tulips for the win.

One of the main reasons I attended the show this year was to see the display by Miskovsky Landscaping.  My friend, Monique posted a few pictures of it on her Facebook page on Friday night as a "must see".  For a small display it was packed with features and plants.  In CT, all plants used in the show must be forced which does tend to limit quantity and diversity but Miskovsky nailed it.

Miskovsky is located in Falmouth, MA on Cape Cod.  He told us he was in Hartford because the Providence show no longer exists .  News to me but not all that surprising.  Hartford and Providence are about two hours driving distance apart and the shows were always held on the same weekend.  According to the article the Providence garden show was sold and will now be part of the Home Show.

I regret that I did not get a few more photos from the Earth Tones Native Plant Nursery display.  I heard someone say one of the forced blueberry bushes was 30 years old!  Since I now live in bobcat and coyote country I can appreciate the nod to my new neighbors.

Before I could capture all the pictures I wanted, my camera battery chose to die.  If you've ever attempted to photograph these shows you know how difficult it is to get a good shot between the glaring lights, black curtain backdrops and crowds of onlookers.