In my old, mostly mature garden, I designed for late season interest so April was never a banner bloom day month for me but I usually had enough to toss together a reasonably respectable post. Not this year.

Spring arrived late to Connecticut this year.  On March 14th a blizzard dumped a foot and a half of snow on my garden.  Usually March snow doesn't hang around long but the storm was followed by a few of weeks of lower than normal temperatures. I was just about ready to rent a giant blowtorch, when normal weather returned.

With no established garden areas yet, I don't have much but here goes:

In the fall of 2015 when I made the decision to move, I immediately started thinking about plants I wanted to take with me. I had many small, choice trees in my old garden, but only one was small enough to survive a move.  Cornus mas is unique here for it's early season bloom (often beginning in March although not this year).  When I saw this variegated cultivar offered for sale in the Fairweather Gardens a few springs ago, I just had to have it.

Chionodoxa was naturalized in some of the beds and the front lawn of my old garden.  A single bulb must have been in one of the perennials I moved.  I smiled when I saw it blooming and made a mental note to add some to my fall bulb order this year. 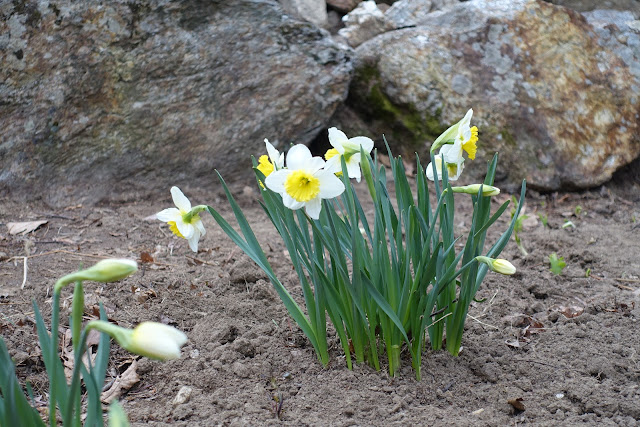 I brought a few later blooming daffodils from my old garden but also inherited many.  I'm currently battling a plethora of invasive plants in the center section of a tiered rock garden in front of the house. Last weekend I raked it out and started digging out everything except these daffodils that are thriving despite the neglect. 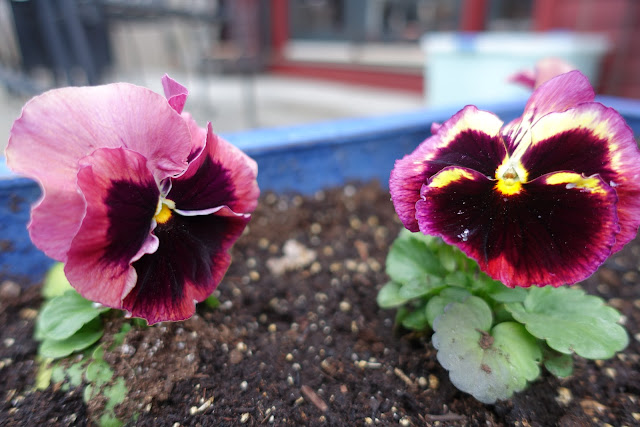 OK so I planted pansies in a couple of pots.  In a month or two I'll be yanking them out or pinching them way back to tuck into mixed containers but for now I'll enjoy their cheerful little faces.

Yes, I have Forsythia.  Lots and lots of Forsythia.  I apologize in advance to any die hard Forsythia fans out there but I will eventually be removing all of it.  Since it's an absolute bitch to dig out, I'll likely start with the "specimen" plants situated around the property and work my way up to this "hedge".

If you follow me on Instagram you know that we (i.e. Dave) are currently knee deep in a back yard DIY tree removal palooza in preparation for the patio installation next month.  I'm hard at work improving and enlarging garden beds.  At times all the work seems overwhelming and I have to remind myself that Rome wasn't built in a day.  I do enjoy the process though and look forward to seeing things come together.

Before I forget (because it's been a while), let me thank Carol at May Dreams Gardens for hosting this widely popular monthly meme.  With any luck I'll have more to offer in May.