Meanwhile Back at the Ranch...

An unusual stretch of overcast weather this weekend made for some perfect picture taking conditions.  While I was away the garden fared better than expected.  In fact I was surprised to see everything so lush.  I decided to hang out a few of the upstairs windows to capture some "aerial" views and was so pleased with the results I just had to share.

If the color appears a little funky, it is.  My camera either over and under exposes pictures depending on the auto setting I use.  Since I'm a point and shoot girl, my only option is to try and fix it in Picasa.  Sometimes I get it right and sometimes not so much.

The Oregon Garden and Resort

Kudos to whoever came up with the idea to locate resort accommodations in a display garden.  The Oregon Garden in Silverton is just that.  For the first two nights of my recent trip to the PNW the Oregon Garden Resort was home base.

Guests at the resort have access to the garden in the early morning and until sunset-long before and after the general public.  Spacious rooms were equipped with a gas fireplace and fridge.  All had small patios overlooking gardens (perfect for in-room happy hours).  Even the parking lots were surrounded by gardens.  Rates were surprisingly reasonable.  All-in-all it was a sweet deal. 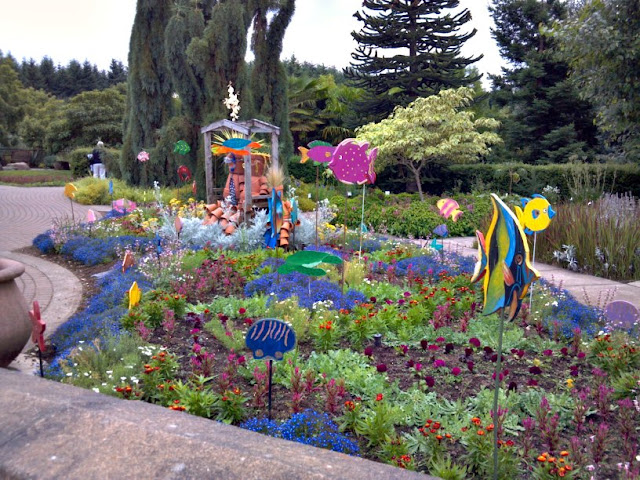 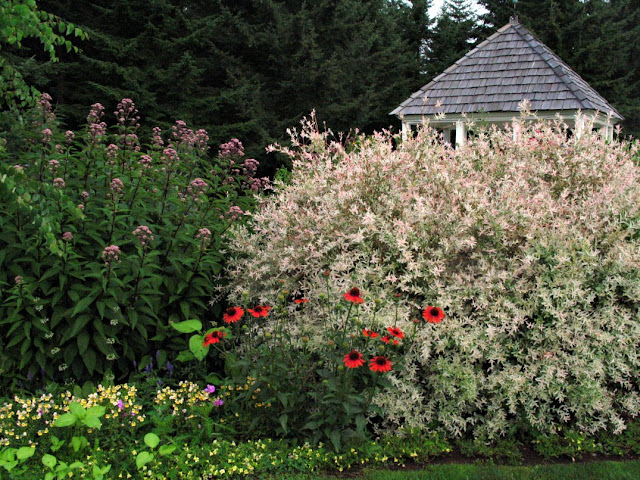 Minutes after stepping off the plane in Portland, we were on our way to tour our first garden of IU9.

As a blogging newcomer, I doubt I've even scratched the surface of all the blog world has to offer but I was thrilled when I found out that Loree's Danger Garden was on our itinerary.  Thoughtful, well designed plant collector's gardens are a favorite of mine.  Loree has transformed a small city lot into a kick ass garden using cool plants and clean, innovative design.  My pictures don't do it justice but here goes... 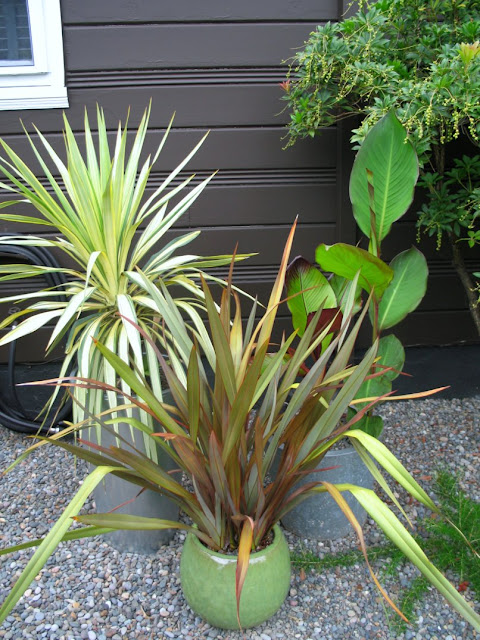 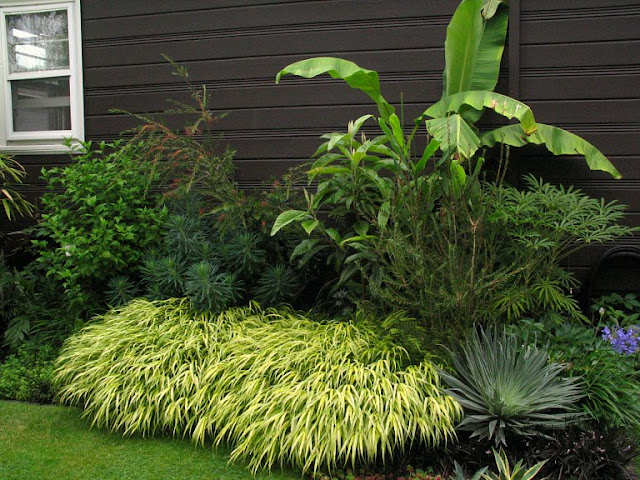 Loree didn't seem the least bit rattled with a bunch of strangers dashing madly around her garden asking questions and snapping photos. But I guess when you have an arsenal of horticultural weapons at your disposal, visitors tend to be well behaved.


From Loree's house we walked to ﻿lunch at McMenamins Kennedy School, a funky restaurant located in an old school building.  In addition to great food, gardens surrounded the building and outdoor courtyard where we ate.  Strolling through Loree's neighborhood was a real treat as well.  So many people have interesting front yard and hell strip gardens.  Florida schmorida, I want to retire to the PNW!

For a good read with lots more information and some history on the garden, including an interview with Loree, check out an article recently featured on Apartment Therapy.

Thanks for sharing your garden with us Loree!
Posted by Sue at 7:27 PM 9 comments:

Another Idyllunion For the History Books

Last night (actually early this morning) I got home from a trip to the PNW where I spent six days touring nurseries and private gardens in Oregon and Washington with a group of people I fondly refer to as my axe murderer and serial killer friends.

Close to ten years ago, myself and a few other Gardenweb regulars grew restless with the usual garden chit chat on the Gardenweb forums.  Some friendships had formed and topics started to stray into areas other than gardening.  At the time off topic posting was frowned upon and policed by the infamous founder and sole moderator of Gardenweb, Spike.  A conversation forum developed where off topic chatting was allowed and we started a series of numbered threads aptly named Idylls.  Participation grew until we had twenty or thirty regular contributors scattered throughout the US and Canada.  Many had absolutely nothing in common except a love of plants and gardens but that was enough.

We started musing about what it would be like to be able to meet in person.  Finally in 2004 a few group members in the Detroit area put together an itinerary for a long weekend in July and tossed out an open invitation.  Those who chose to take the plunge were treated to tours of public gardens, private gardens and meals served by our hosts in their gardens.  Needless to say it was a huge success.  Idyllunion was born and has since become an annual event.

Although most of the group has moved away from Gardenweb, we continue to stay in touch through blogging and a variety of social medias like Facebook.  Many idyllers have come and gone over the years but a core group remains.  Last week was our ninth Idyllunion, or IU9 for short.  I am proud to report that I have been to every single one of them.

In the next few days I'll be going through pictures, organizing my thoughts and will start sharing some of the incredible gardens we visited and people we met.  Also traveling with me was Denise of A Growing Obsession and Kathy of Gardenbook.  They have already started blogging about the trip and it will be interesting to read the different perspectives.  Stay tuned...

In 2004, a renovation to my house provided long awaited direct access to the backyard.  I wanted a space for outdoor living/dining and a patio seemed like the natural choice based on the lay of the land.  Before the patio was even completed I was already envisioning all the cool plants I could grow in the new surrounding garden beds.  The main patio bed is about twelve feet deep and backed by a south facing wall of the garage.  I suspected it would be a micro climate where I could get away with growing plants borderline for my hardiness zone.  At the top of my list was Musa basjoo, the hardy banana.

In the spring of 2005 I ordered one from Fairweather Gardens, one of my favorite mail order nurseries.  When it arrived in April it was dormant in a gallon container.  I planted it immediately and before long little banana leaves started to sprout.

Musa basjoo is right up my plant collecting alley.  Besides being a huge conversation piece, no other hardy semi-hardy plant provides such bold tropical foliage for northern gardens.  And except for regular water no special care is required.  By the end of the first summer I felt like I was in my own little tropical paradise.  But...I had to get it through the winter because then, and only then would I be able to stake my claim in the land of zonal denial.

After a frost took out the foliage, I cut the whole plant back to about a foot, surrounded it with a wire cage filled with shredded leaves and crossed my fingers.  The spring of 2006 was warmer than the elusive "normal" so often referred to by those who attempt to predict weather in New England.  In April I noticed what I thought was the shredded leaves settling in the cage but quickly realized the plant was growing from the cuts I made the previous fall.  Nothing above ground had died back.  Incredible!

By the summer of 2008 I kept expecting to see Jimmy Buffett serving margaritas on my patio.  Since I wasn't looking to join the Chiquita family and I really wanted to grow other plants in this garden, I decided to do away with the winter protection program.  Now growth starts later and from ground level

On the two occasions when my garden has been open to the public, Musa basjoo was the most asked about plant.  It was fun to watch people try to peek at the base without being to obvious.  Then the inevitable question, "Do you bring that in for the winter?" followed by the look of surprise at my answer.  Yes siree, Musa basjoo is a hardy plant for me!  And if you garden in zone six (and possibly the warmer side of five) it will probably be hardy for you too.

If you think you might want to give Musa basjoo a shot, I recommend spring planting and winter protection for at least the first year.  A protected site and good soil amended with compost will help ensure success.  For a couple of years I've been toying with the idea of trying to grow it in another, less protected garden area just to see what happens I just haven't found the right spot.

Welcome to bloom day at Idyll Haven!  Thank you to Carol at May Dreams Gardens for hosting this monthly event.  Like many of you, lack of rain and extreme heat is taking it's toll on the garden.  Here in the greater Hartford, CT area (zone 6b), we have already experienced fifteen days with temperatures over 90F this summer.  Eighteen days is the average for an entire year and based on the extended forecast we will get there on Wednesday.  Boo!  Hiss!

When it comes to watering I'm a minimalist.  Until this past week I had only been watering containers and new plantings by hand.  When my established gardens started to collapse I knew it was time to change up the game plan.  Now I'm dragging hoses and have sprinklers going on both sides of my house every night.  Despite the challenging conditions, I was surprised at how much I had in bloom.