Happy Belated October Bloom Day!  Despite my best efforts, I can't seem to put a coherent blog post together these days.  What can I say?  Life is busy.  In June I co-hosted the 11th annual Idyllunion which was a rousing success.  Up to that point I worked like a dog in the garden, planting, mulching, designing and maintaining containers.  Come July I slid into maintenance mode and never slid out.  Summer temperatures were moderate this year with very few days in the 90s.  Rain was scarce though and I'm not the best at watering so parts of the garden got a little crispy towards the end.  All in all I'm happy with the way the season turned out.

One of the things, in fact probably the only thing I hate about fall is the noticeably shorter days.  All of these pictures were taken after work on the 15th.  The day was cloudy but by six o'clock, the light was so low I had to give up on the picture taking.  Despite the limitations, here's what I was able to get: 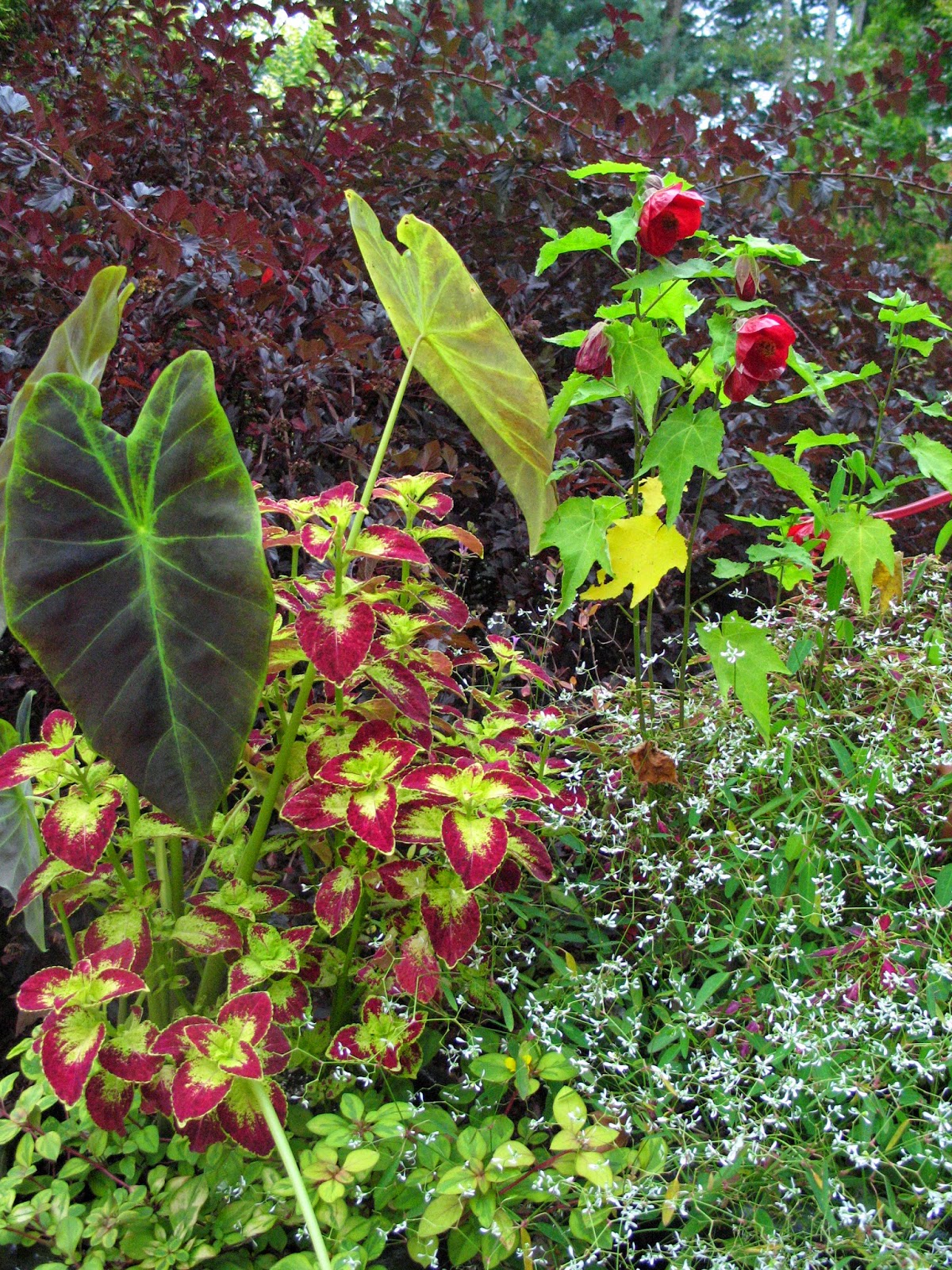 Although we have had some cold nights, Jack Frost has yet to pay a visit so the containers still look decent.  The red Abutilon in the above picture is Voodoo, one I successfully overwintered under lights in the house. 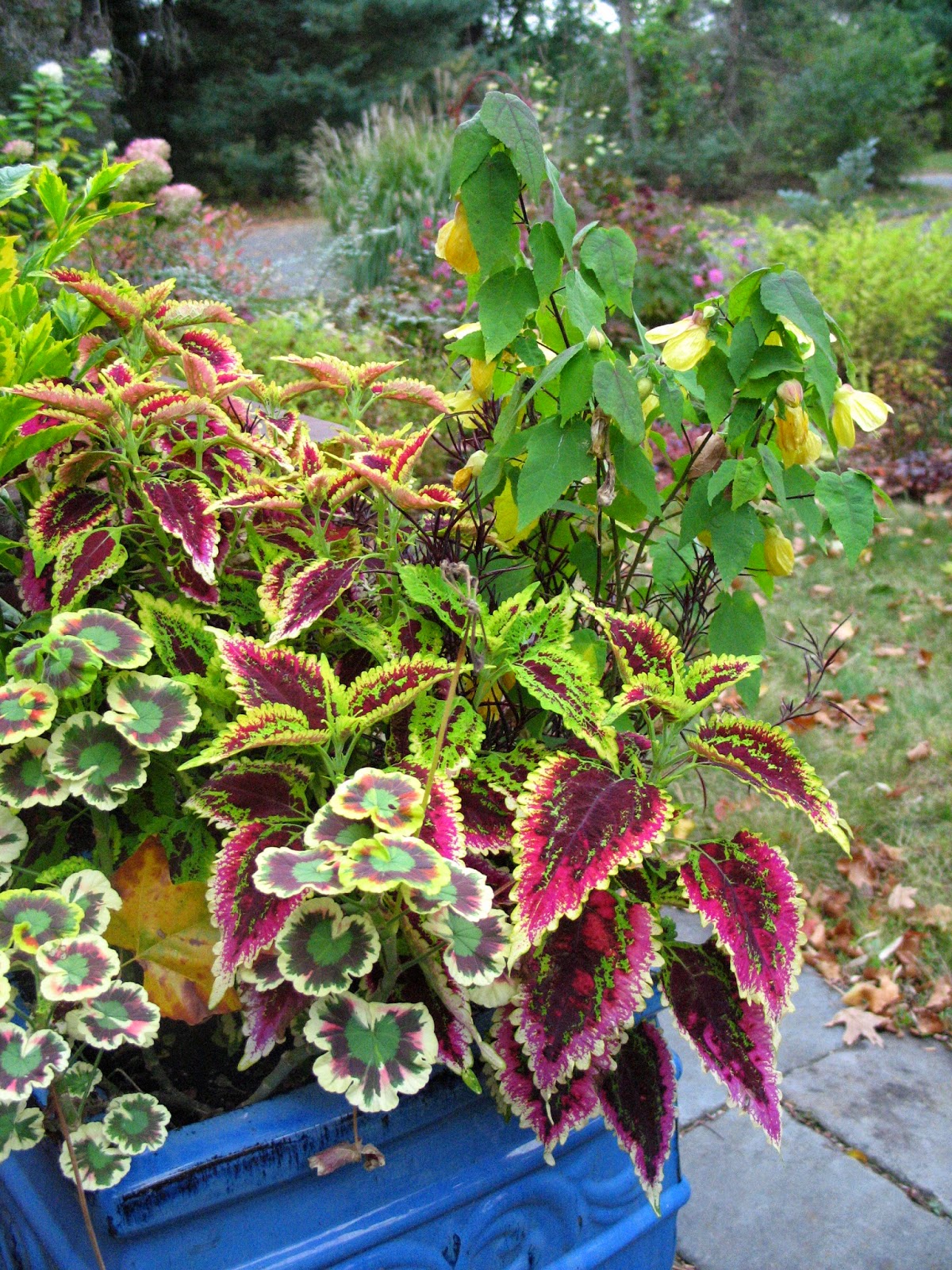 The no-name yellow Abutilon above has survived two winters in my house.  I think I'll go for three. 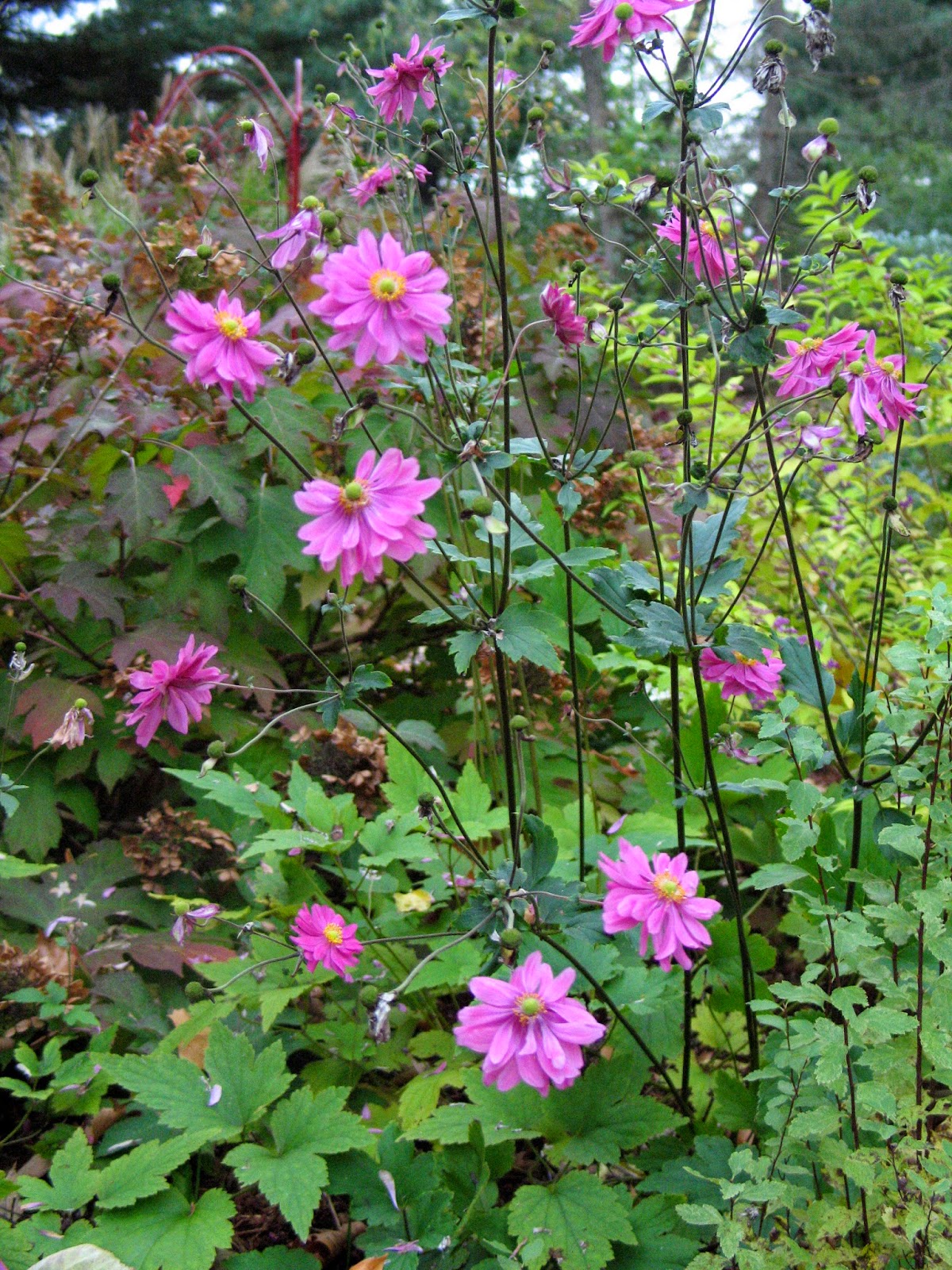 I think this is Anemone 'Charlotte' but don't quote me. 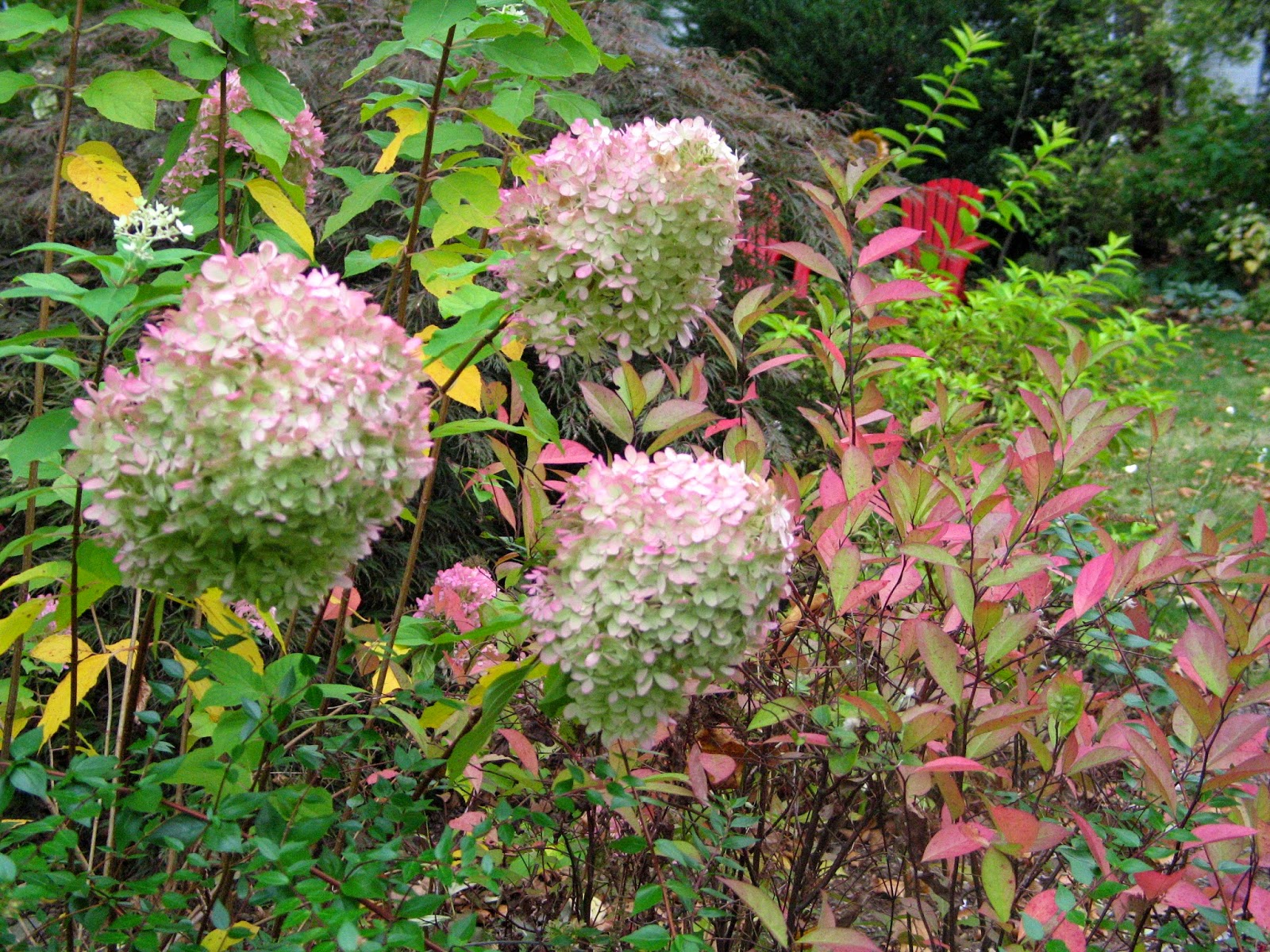 Hydrangea 'Limelight' with a side of Itea 'Henry's Garnet'. 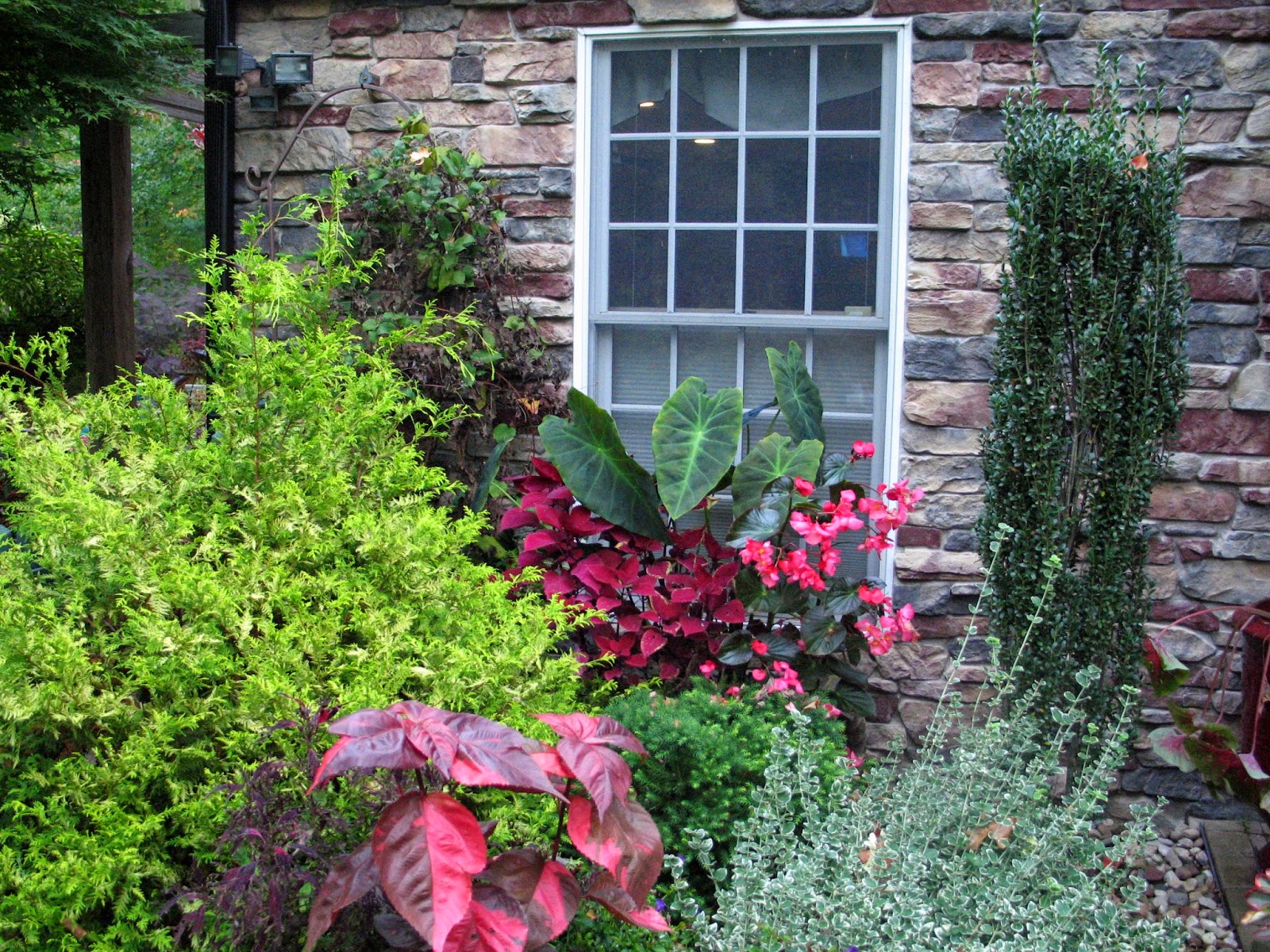 One of the downsides to a cool spring and summer was my Colocasias never grew to the usual mammoth proportions.  I won't hold it against them. 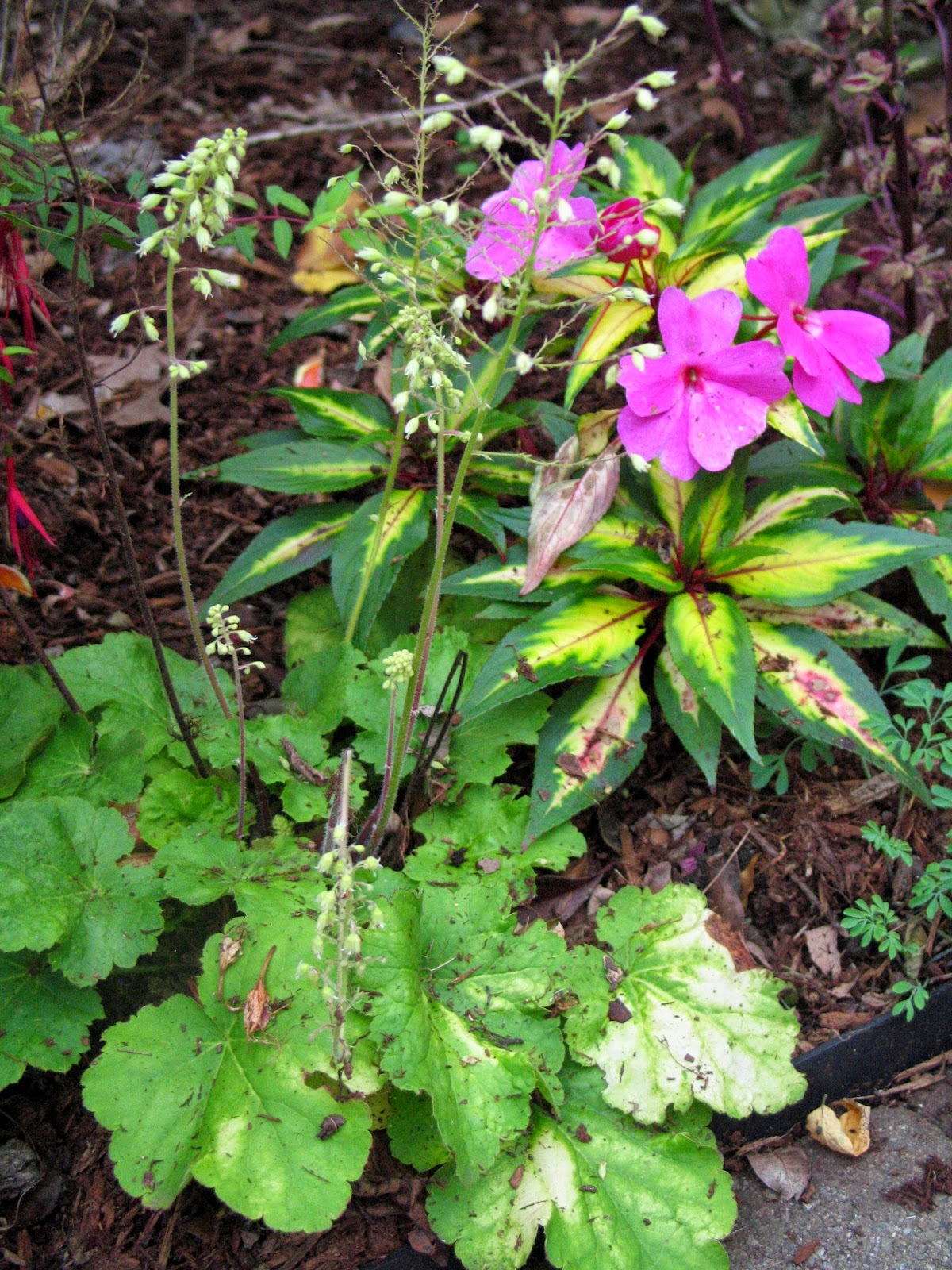 As you'll see in other pictures, variegated New Guinea impatiens have become anchors in my gardens. 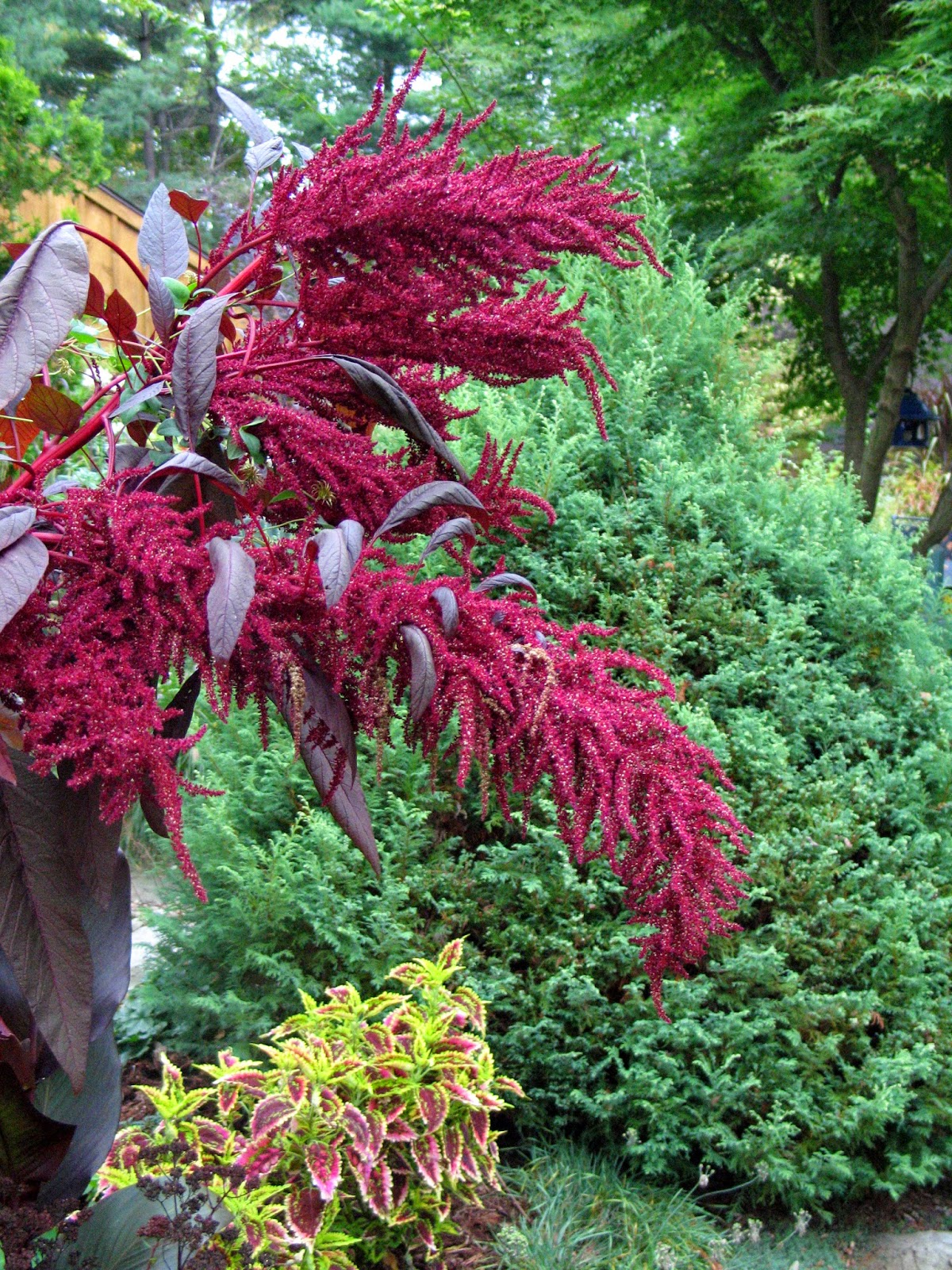 This dramatic Amaranthus has been a rampant re seeder in my garden for years.  I've learned to thin most of it out, leaving just a few strategically located specimens. 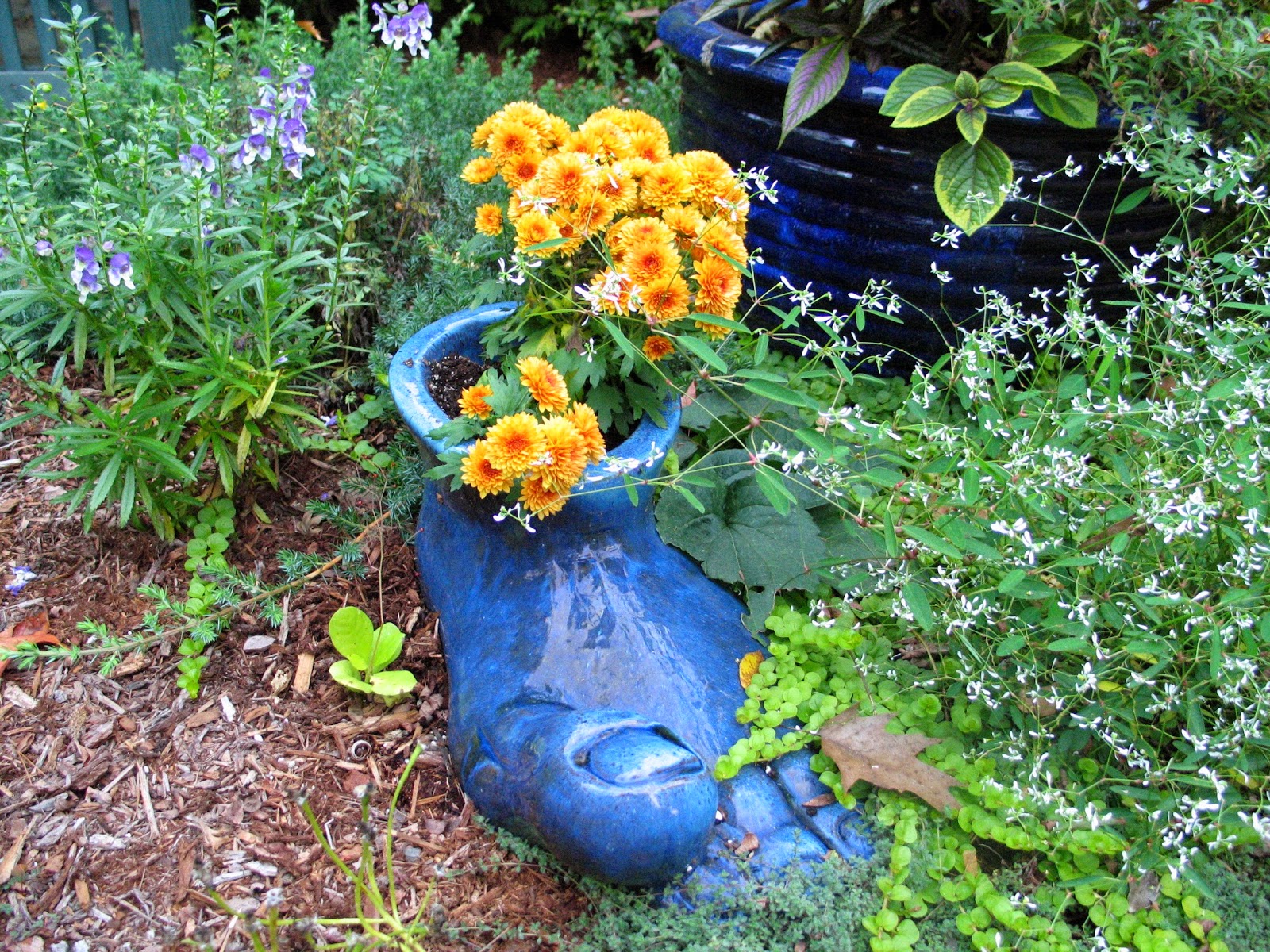 OK, so when the original plant in the blue foot pot pooped out, I bought one fall annual. 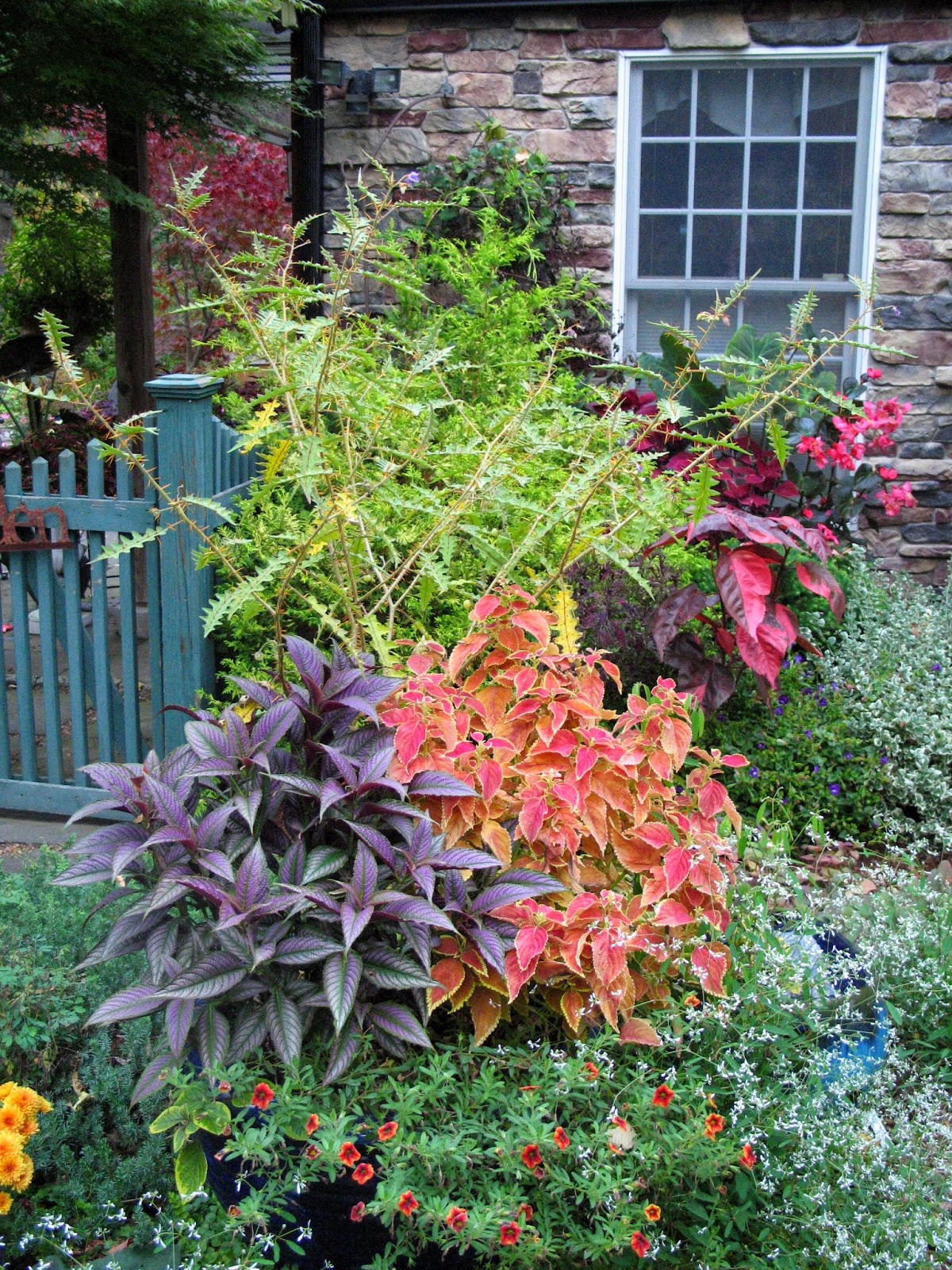 Yes, there is a container under there somewhere.  I'm going to miss that Strobilanthes. 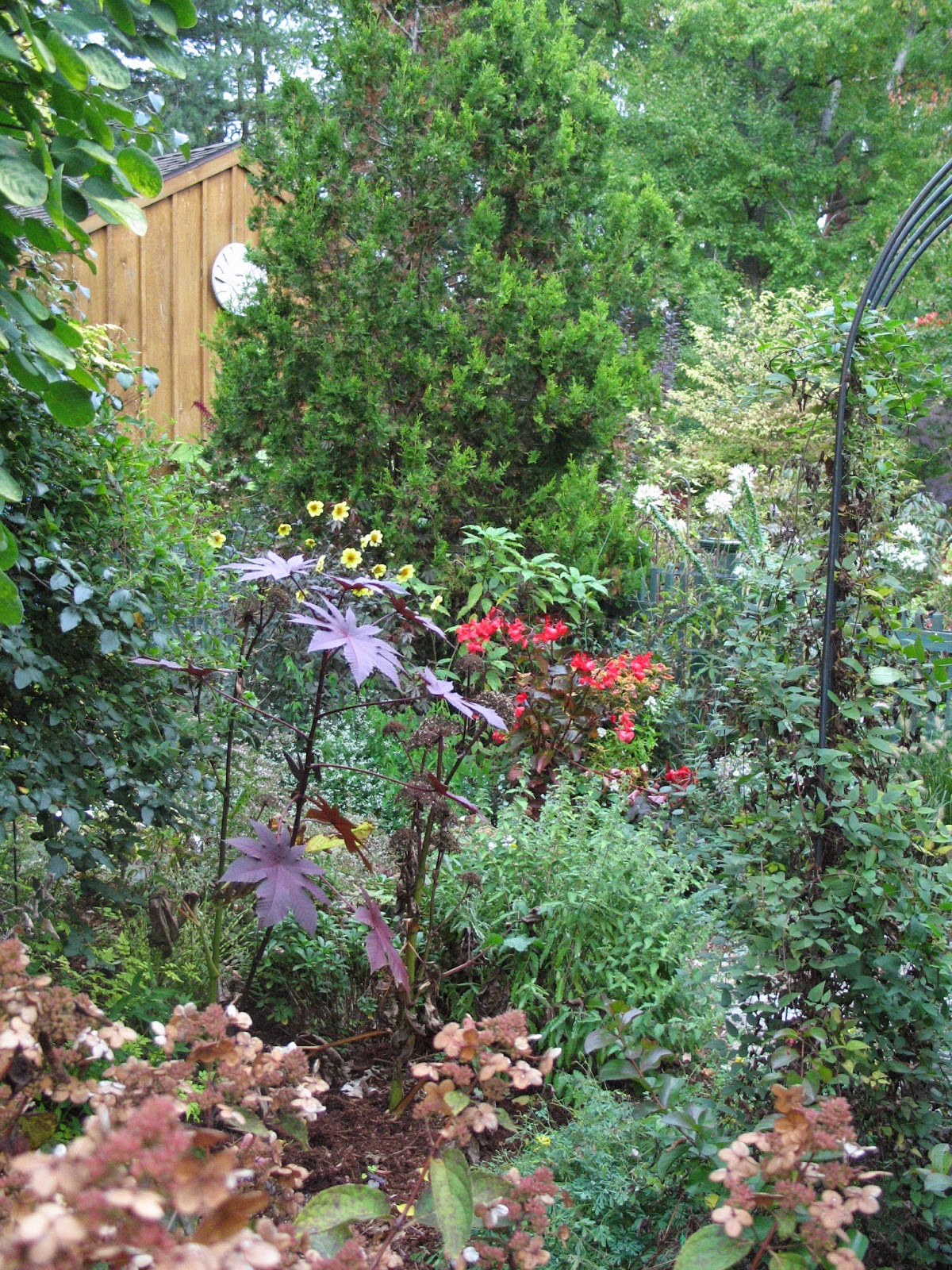 Oh the bounty (and jumbled mess) of fall! 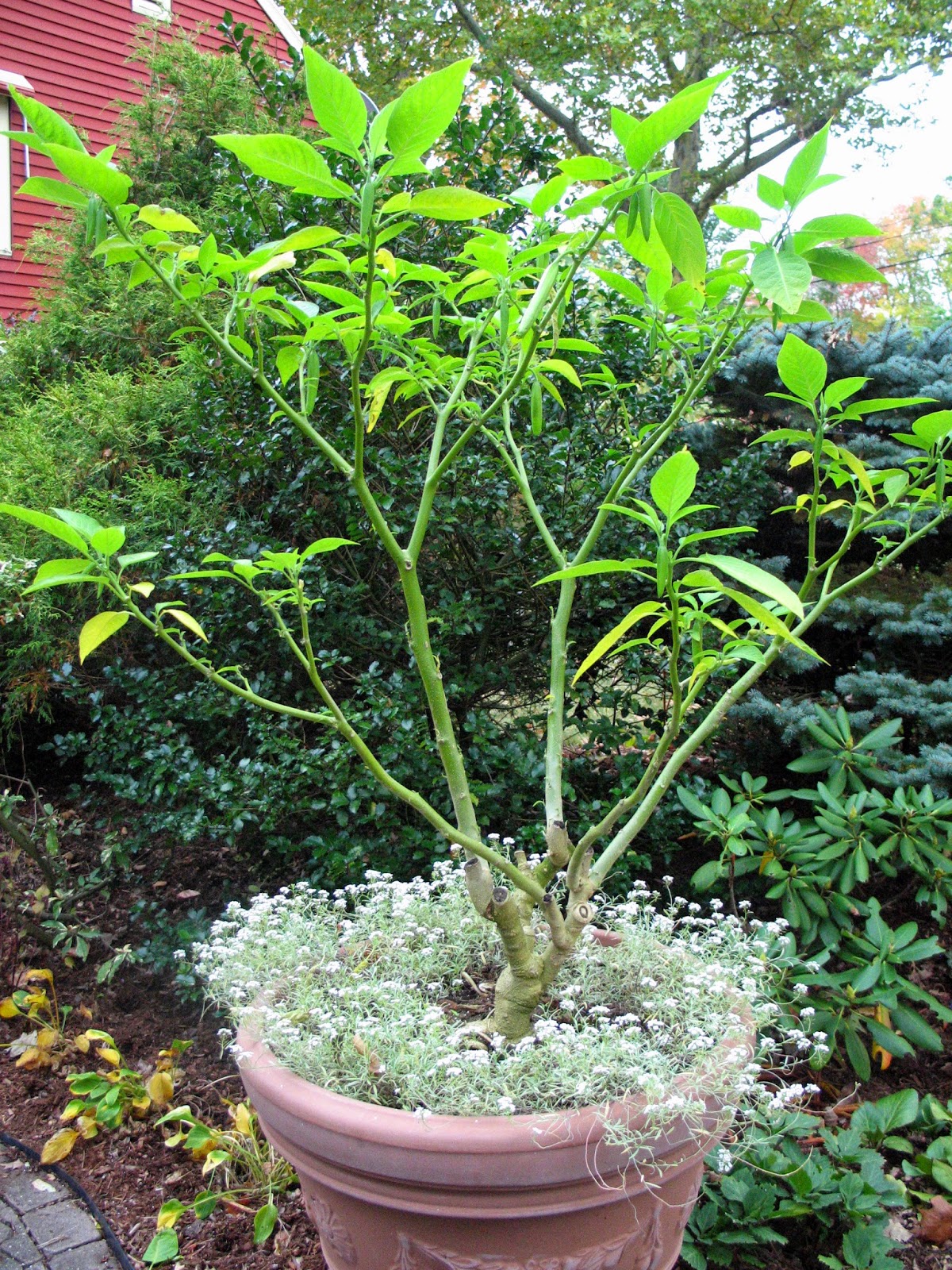 The white Brugmansia may be done for the season but the variegated Alyssum 'Frosty Night' is still going strong. 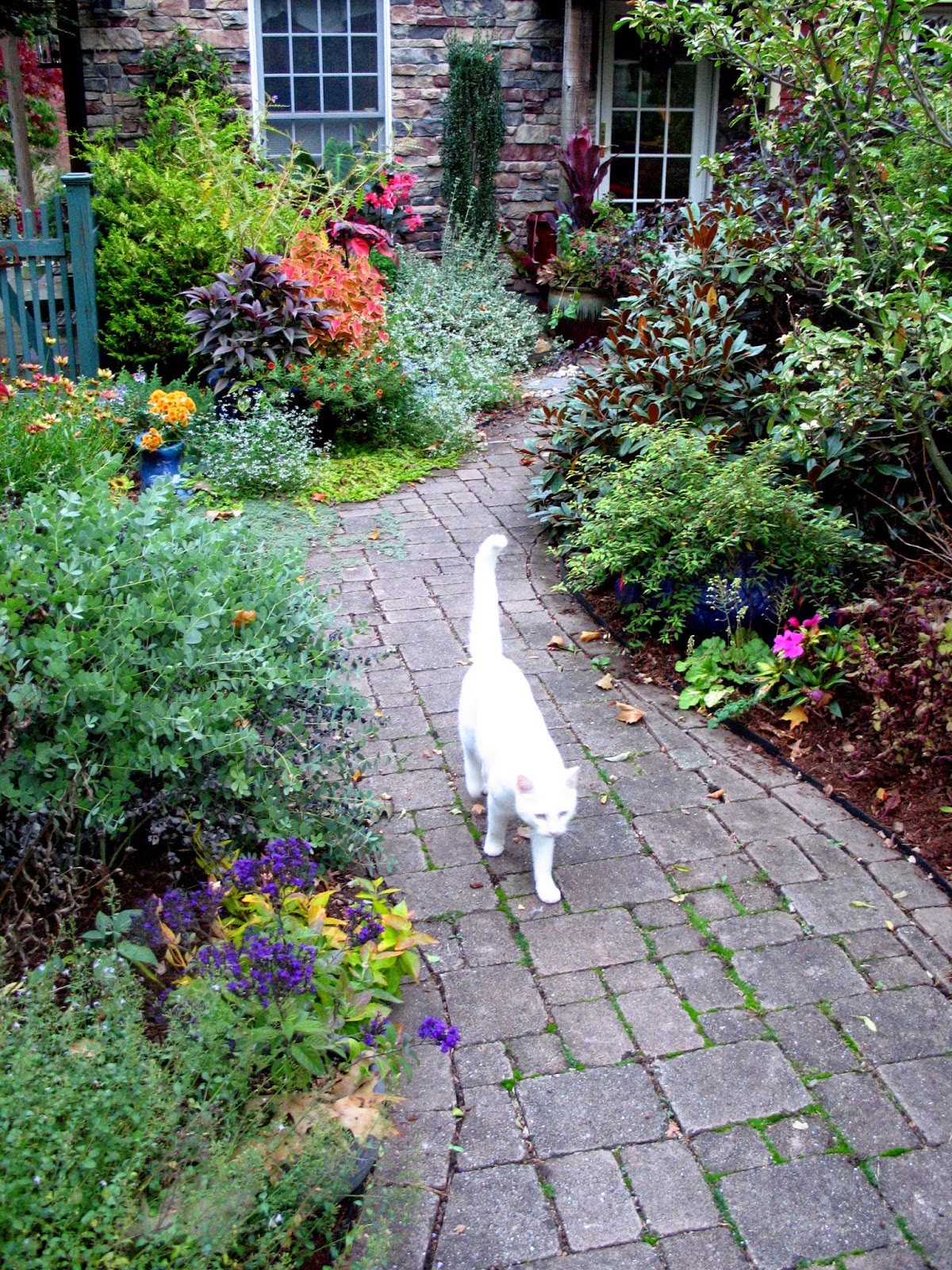 A fleabag in his element. 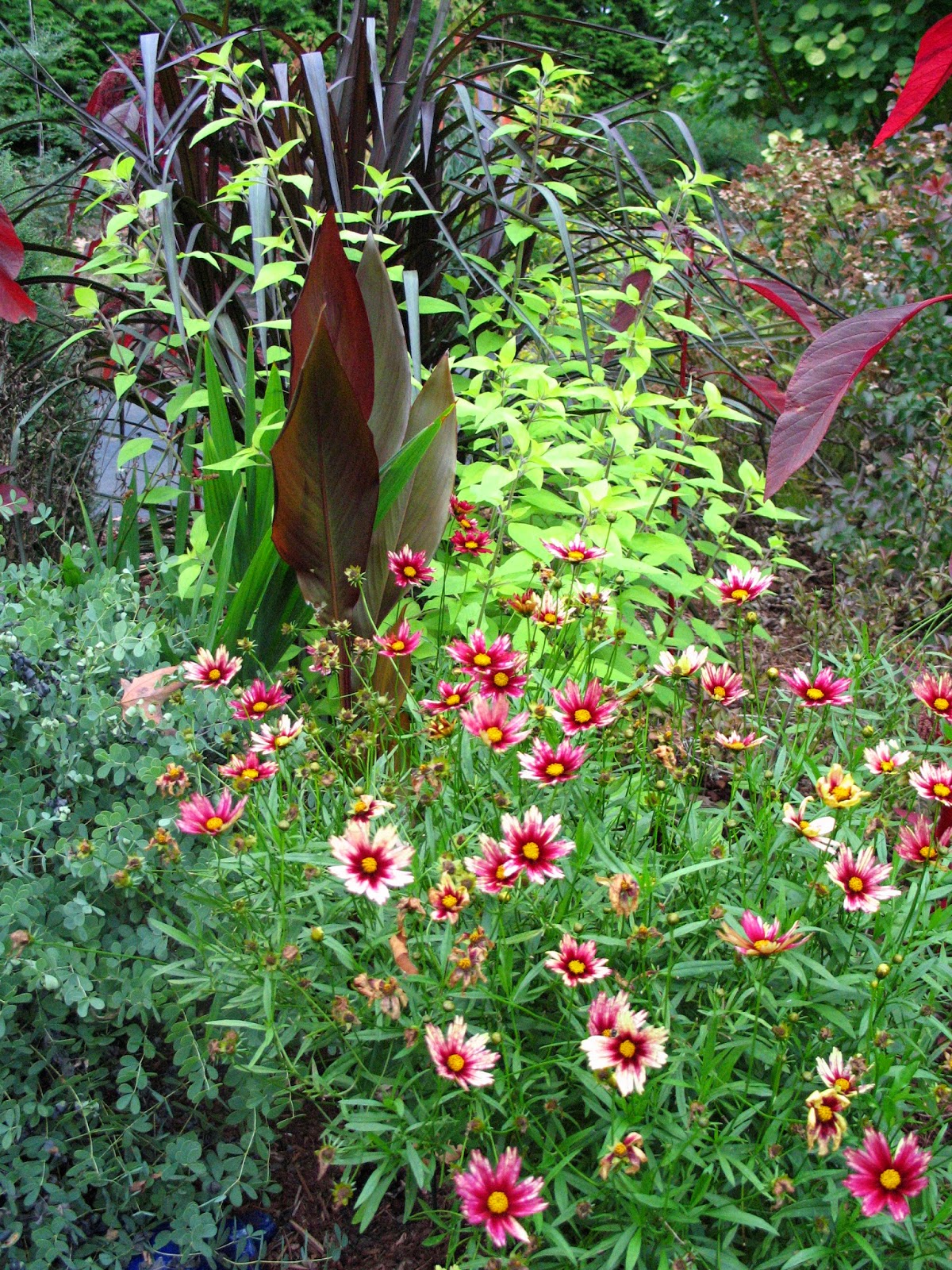 After moving this Coreopsis a couple of time over the past couple of years, I finally found the right spot.  What a workhorse!  Wish I could remember the cultivar.  It's tall and requires support in my always less than full sun garden but worth the effort. 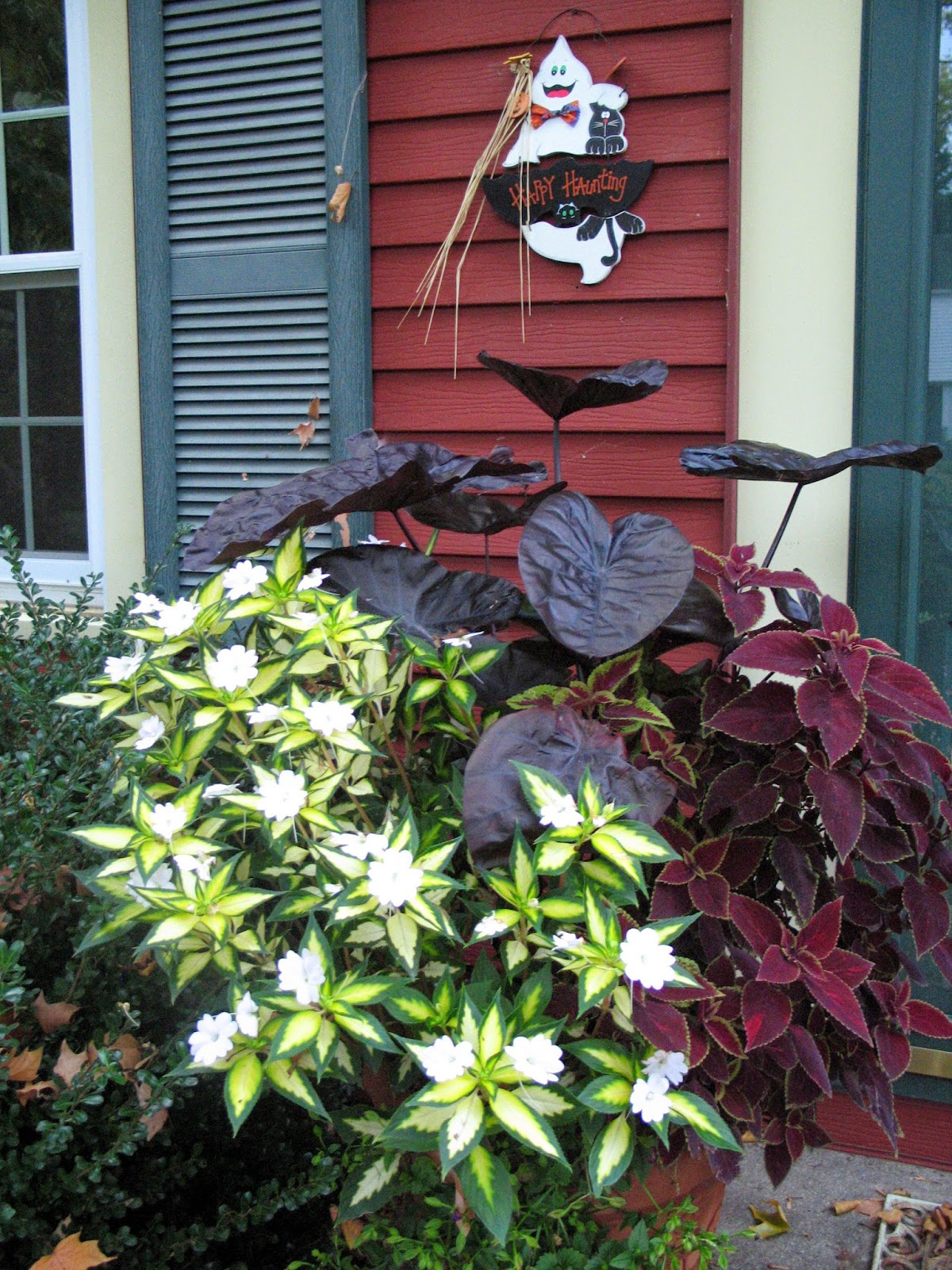 Variegated Sunpatiens.  Need I say more.  If you see them next spring, buy them.  Buy them in flats if you can and tuck them all over your garden.  You can't go wrong. 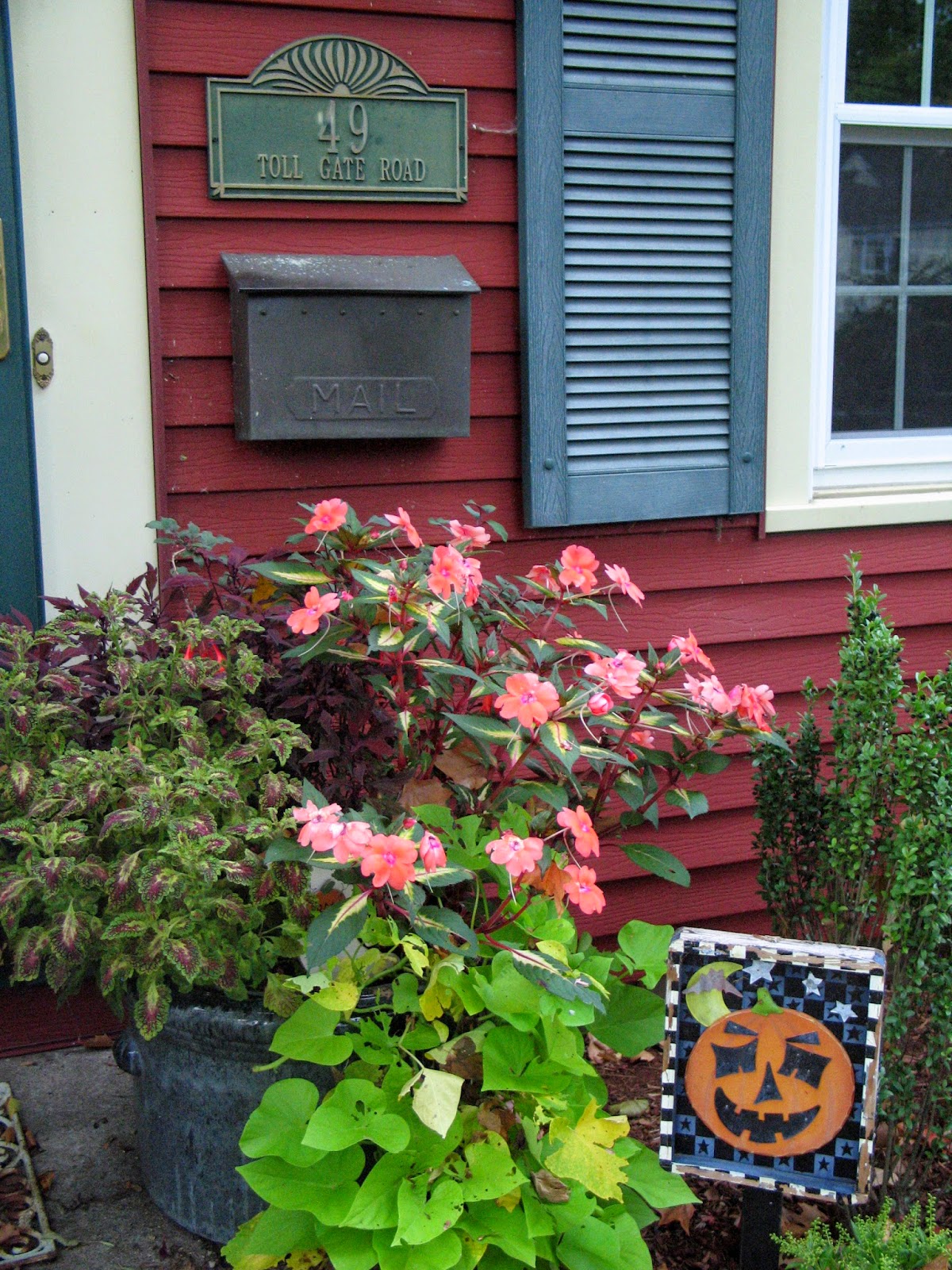 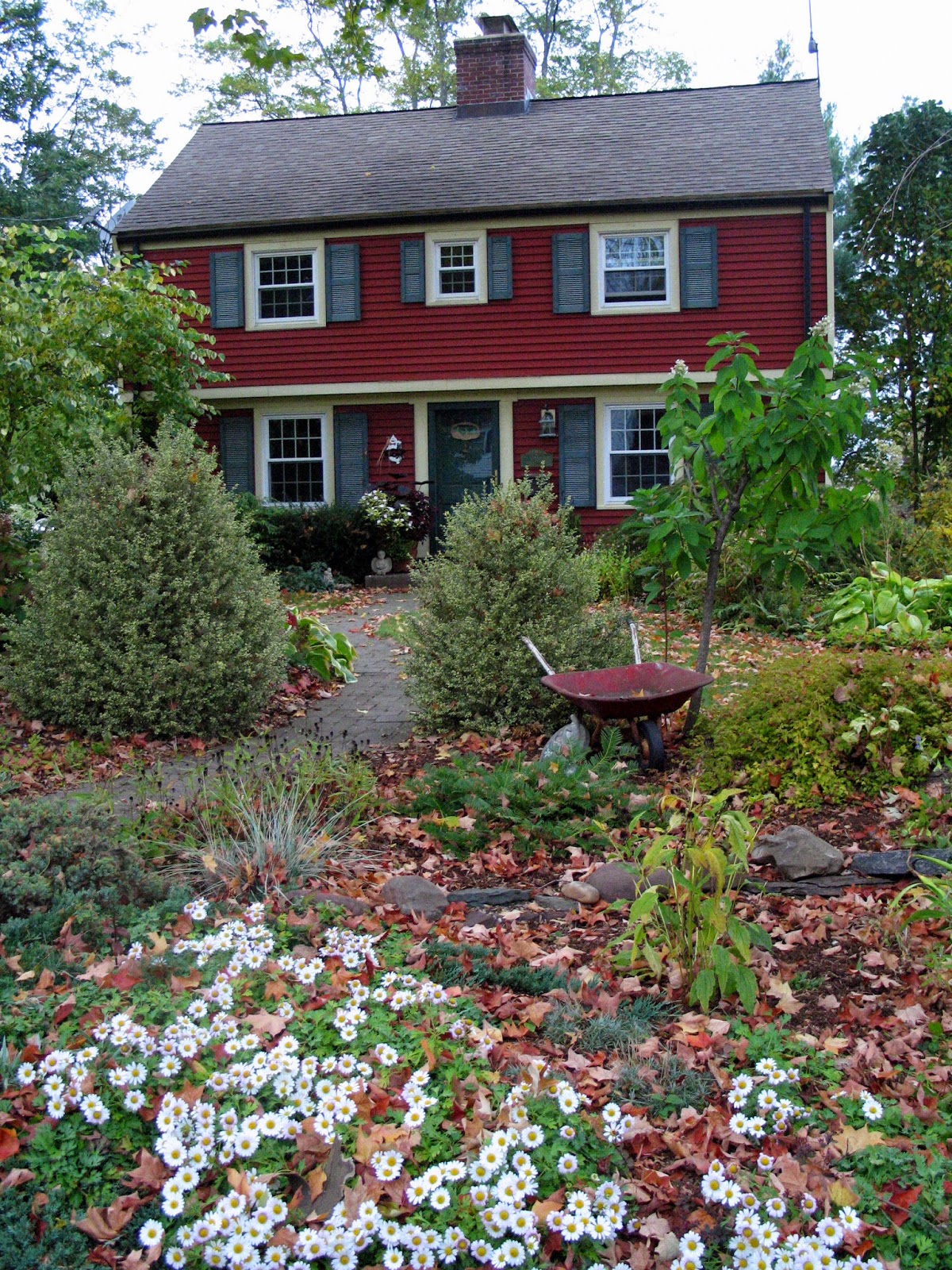 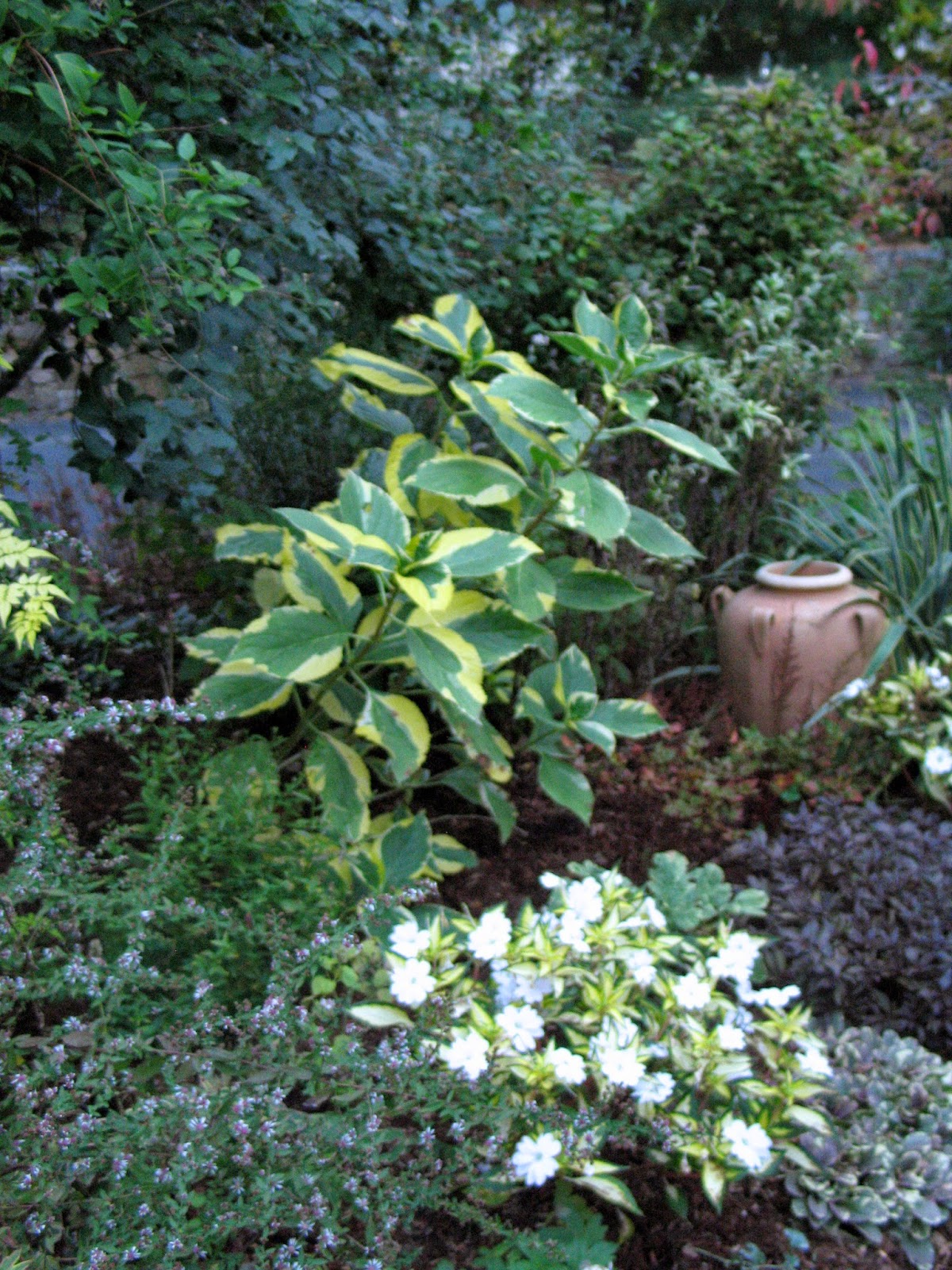 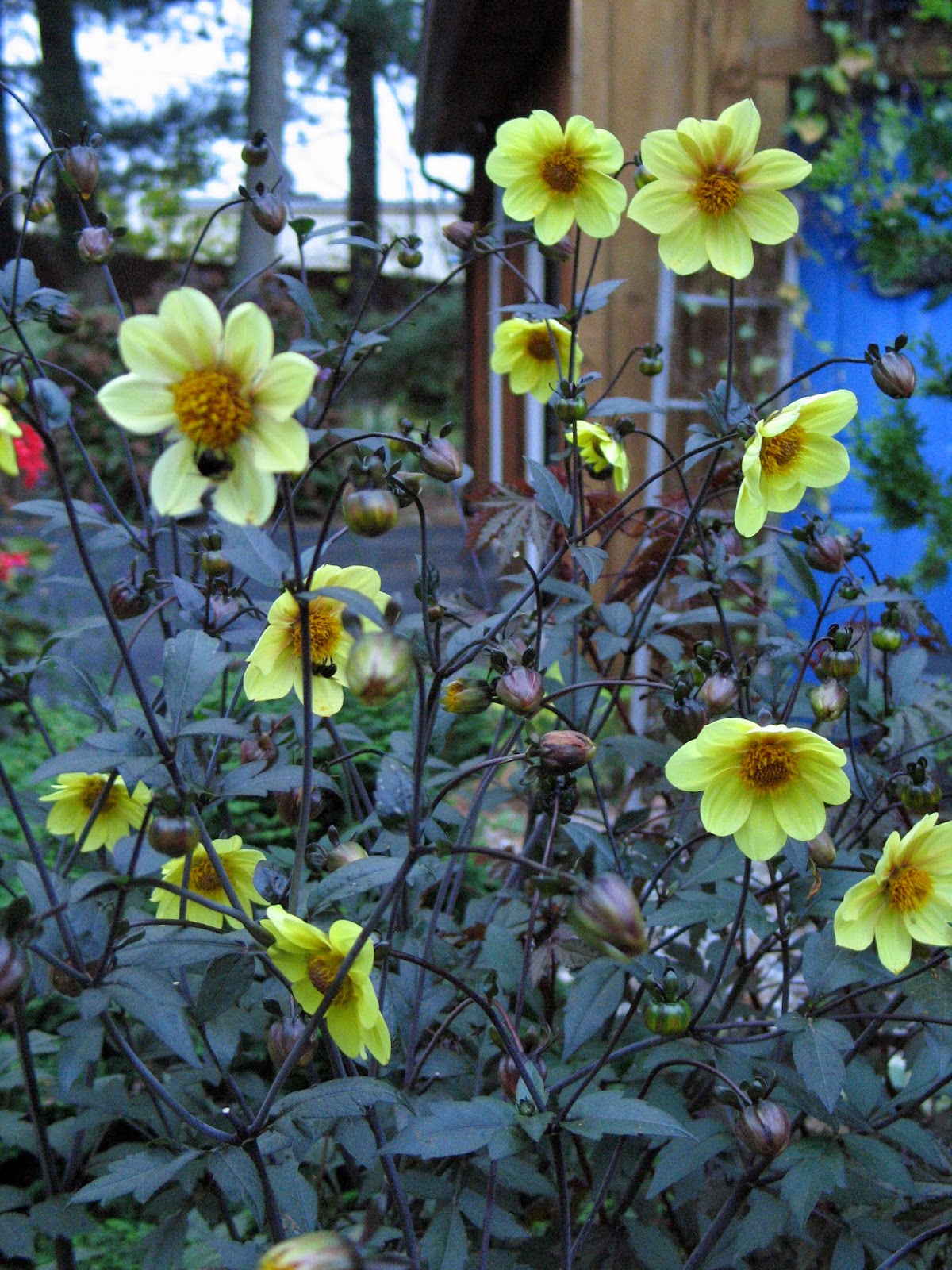 Dahlias are far from hardy in my CT zone 6 garden.  So back in the spring when I saw what I thought was a teeny dahlia seedling I almost weeded it out.  That itty bitty seedling grew into this tall, sturdy stemmed beauty. 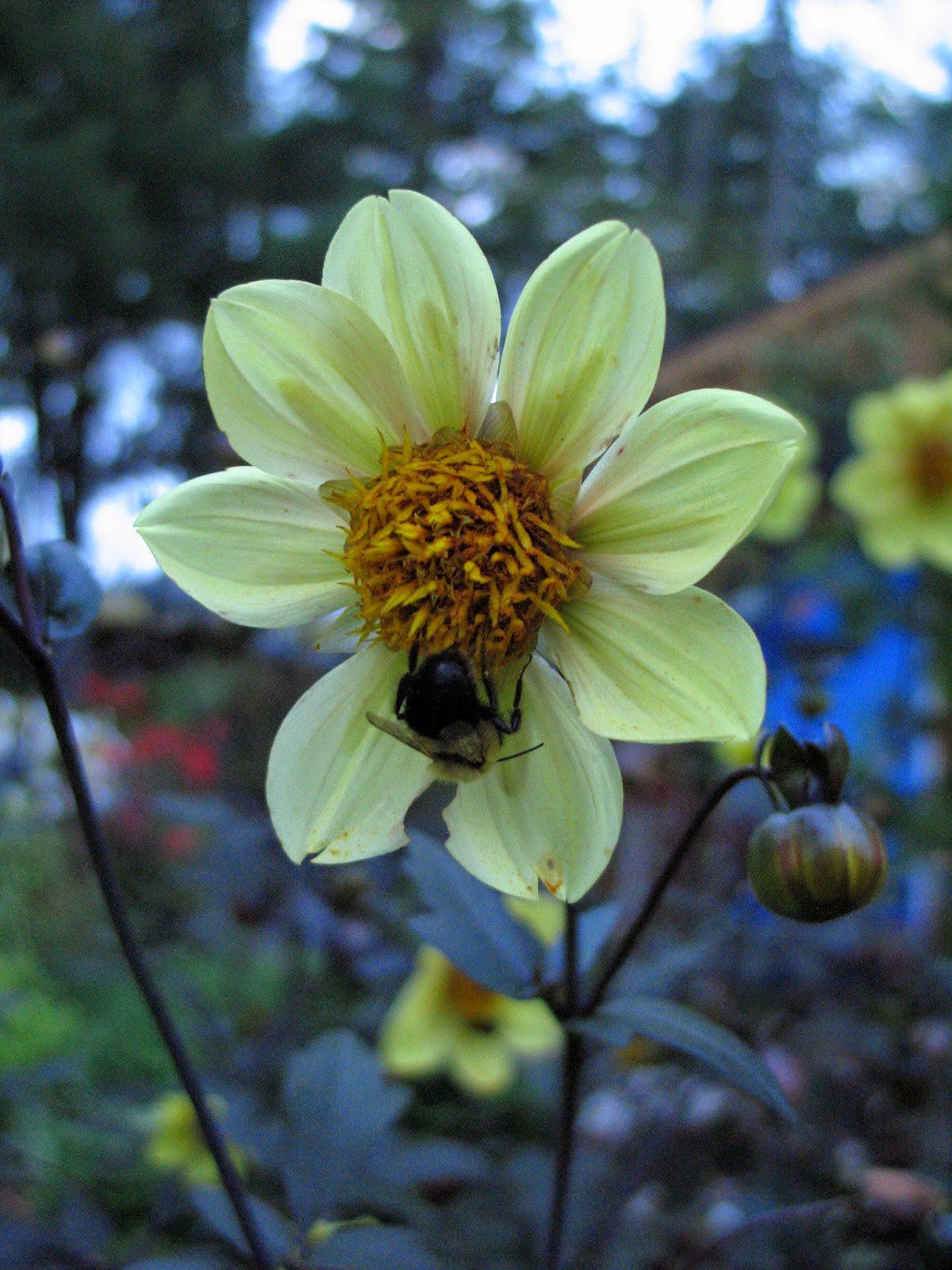 Definitely a candidate to dig and store. 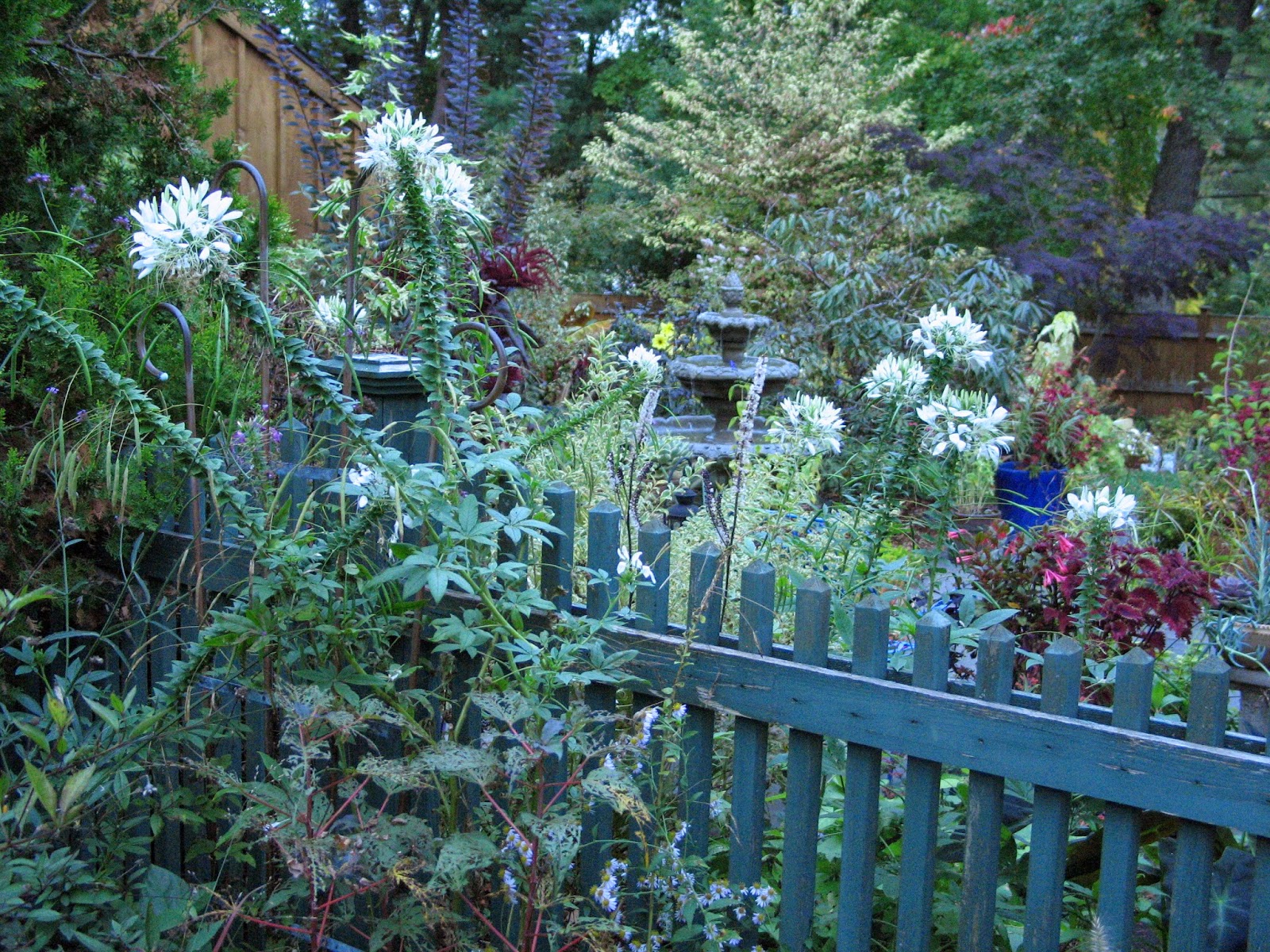 Cleome is another rampantly reseeding plant here.  Over the years I've learned that less is more and just aggressively attack the seedlings in the spring. 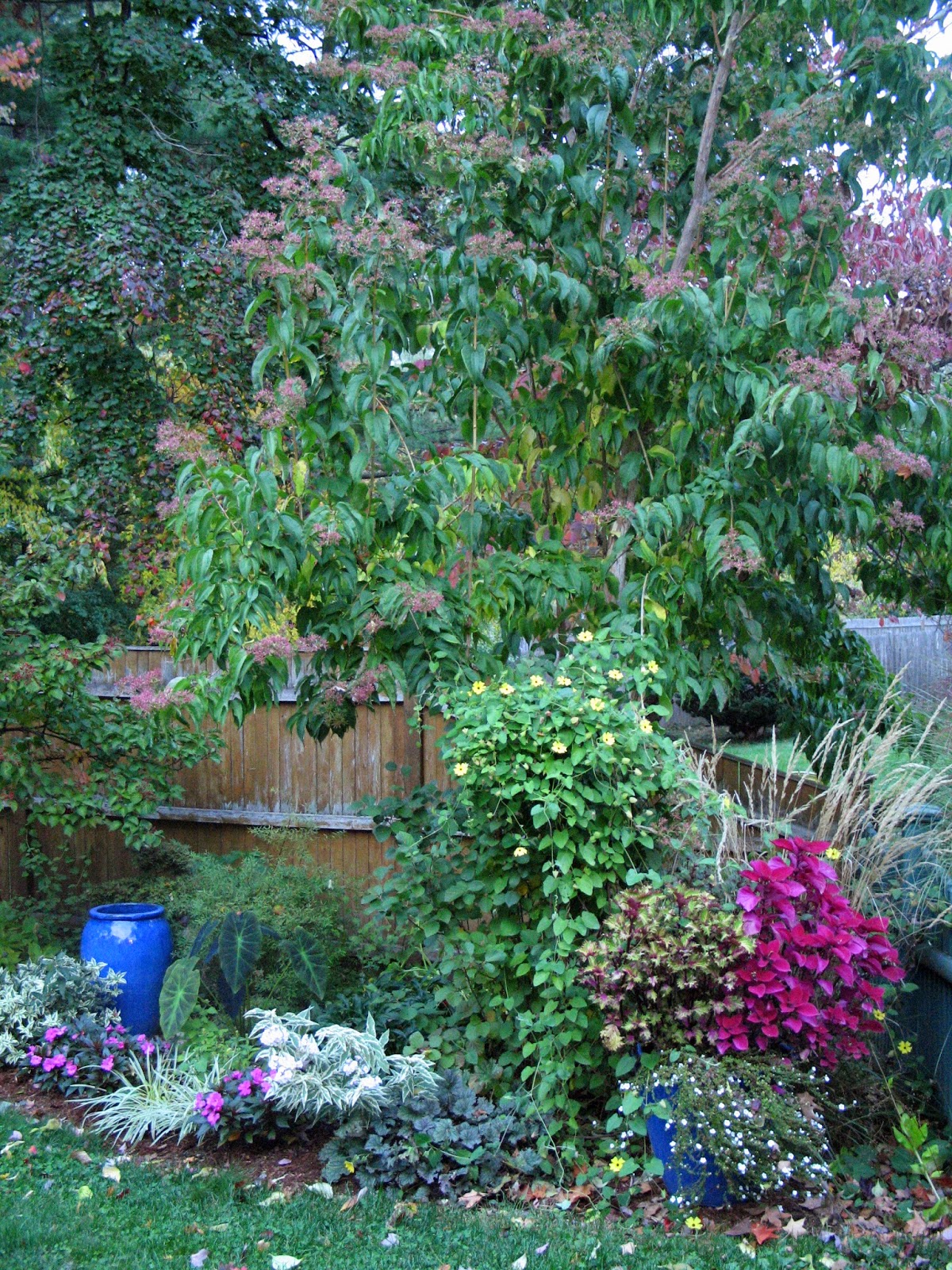 Part of the backyard border that seems to be holding up well.  You can't tell from the picture but the Heptacodium is coloring out well this year. 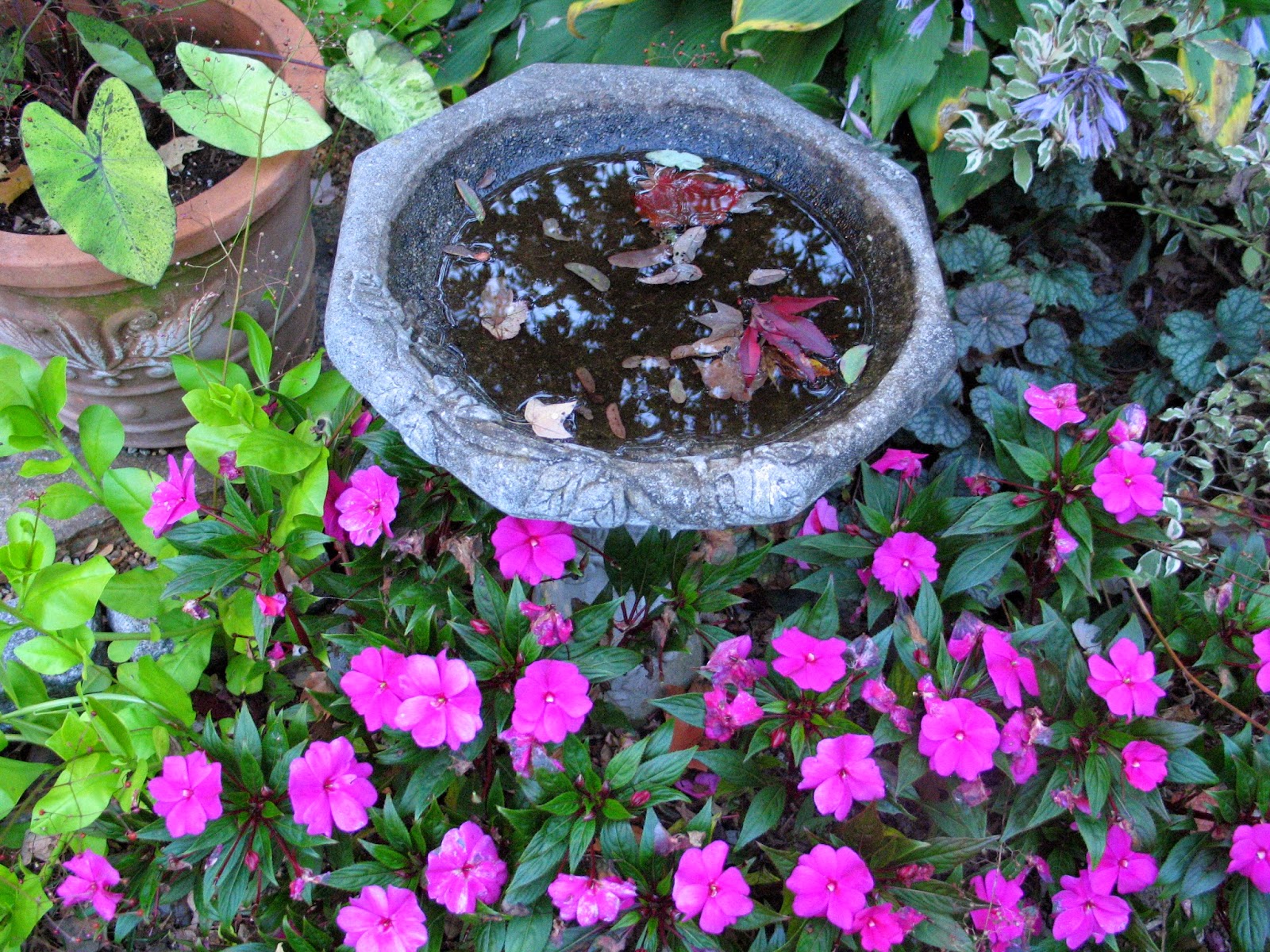 Even though the impatiens are still going strong, garden season 2014 will soon come to a screeching halt.  As much as I enjoy the bounty, I look forward to a few months to focus on other interests. 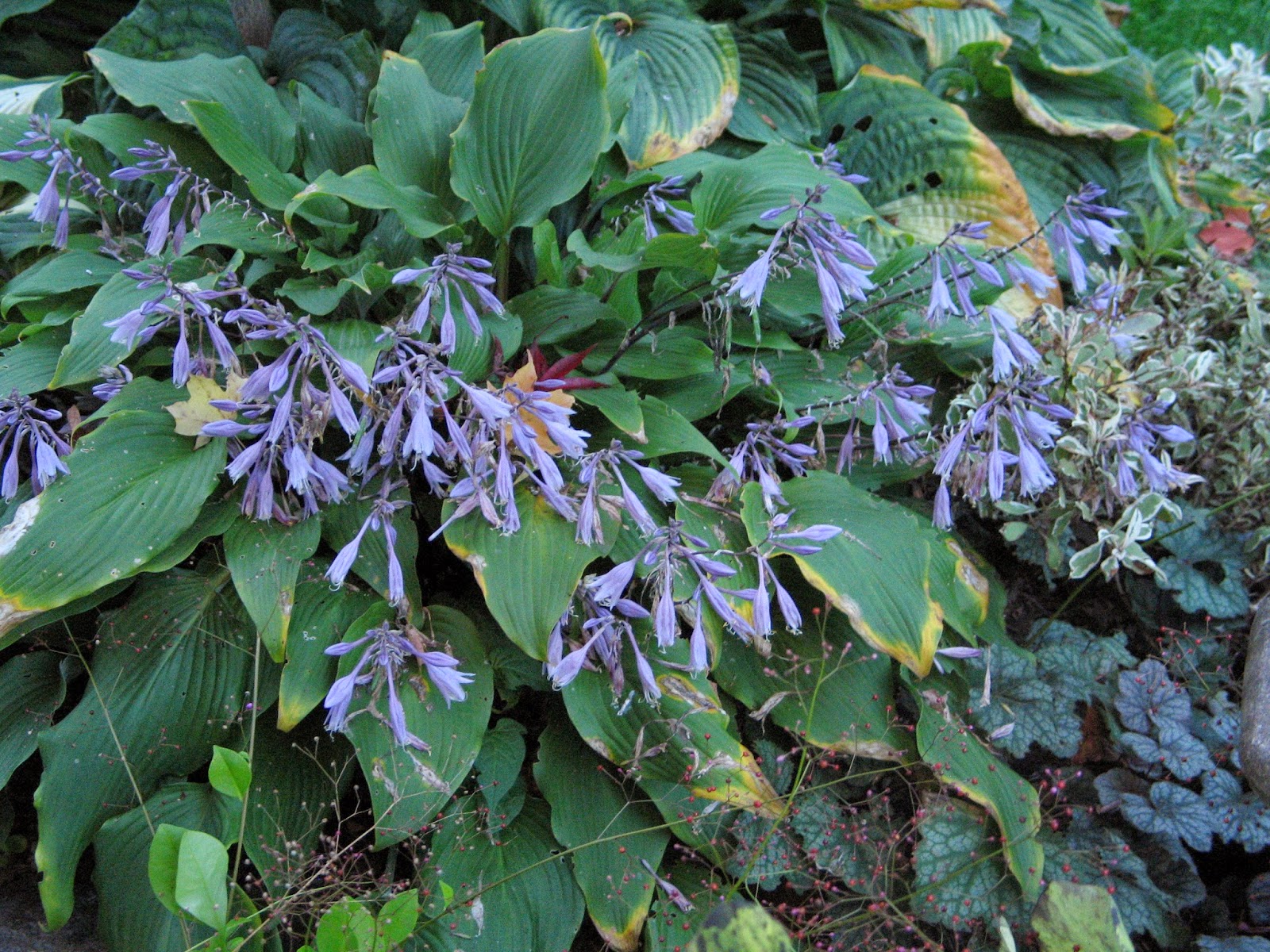 Hosta 'Red October' is non nondescript most of the season but how can you not like these October flowers? 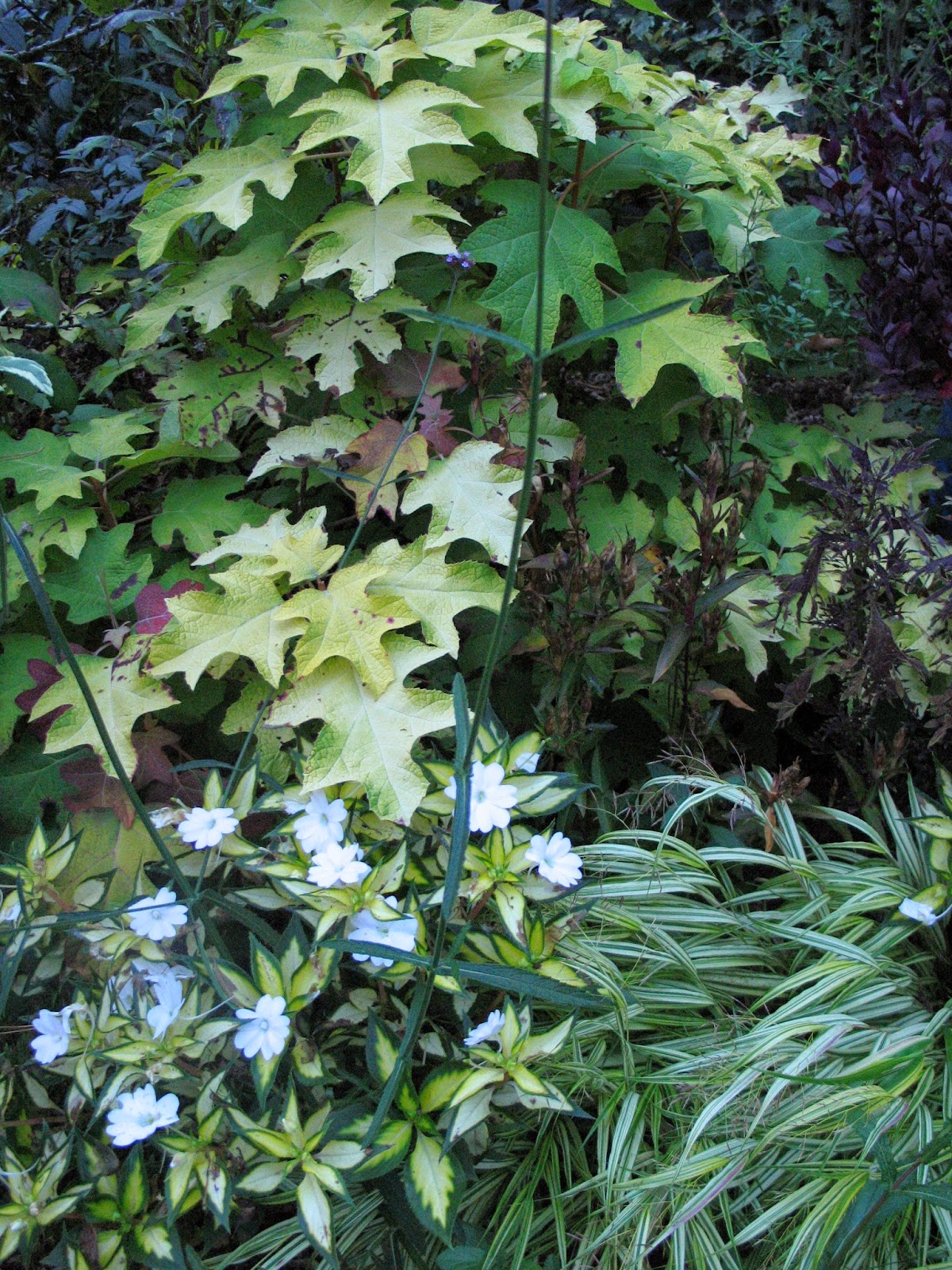 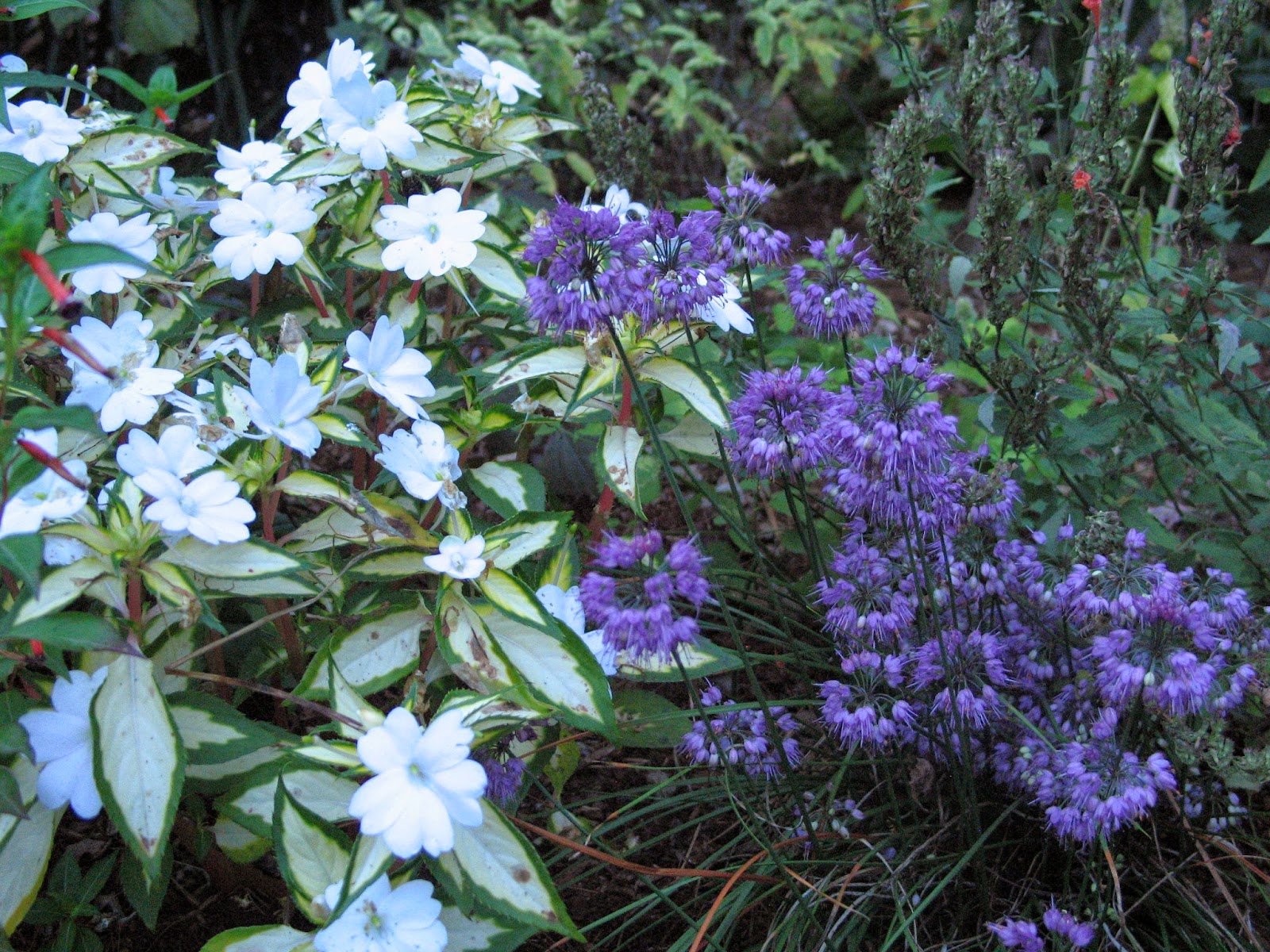 And playing nicely with the flowers of late blooming Allium 'Ozowa'. 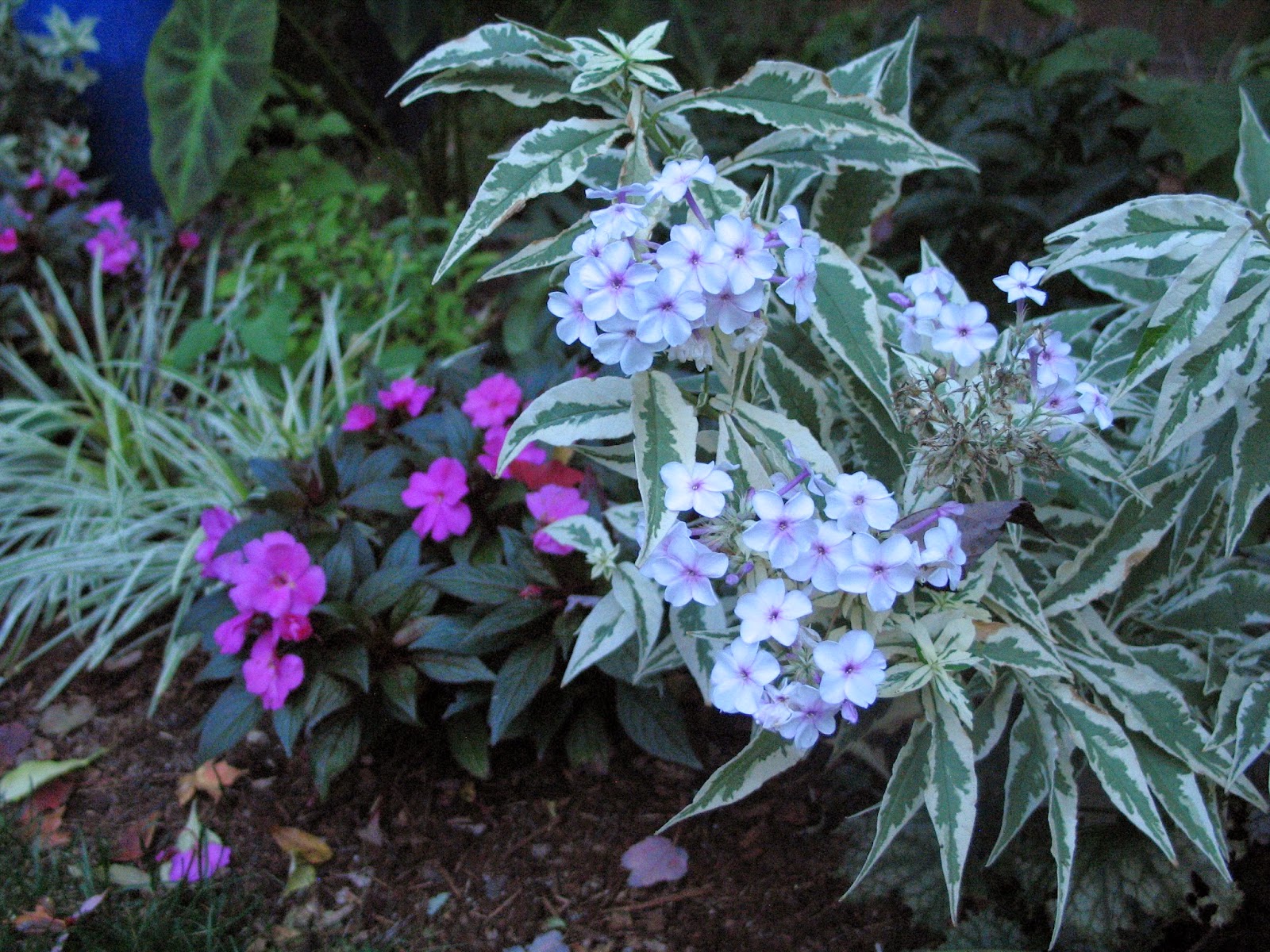 Last but not least, one of my favorite perennials Phlox 'Norah Leigh'.

So there you have it-my 2014 garden season in a nutshell.  Due to my tardy ways, I will not be adding myself to the Bloom Day roster but if you haven't done so already, head over and visit Carol at May Dreams Gardens and check out the October happenings at gardens all over the globe.

Bloom Day in the Merry Merry Month of May

Garden frenzy has descended on Idyll Haven.  After losing much of April to less than stellar weather, May has become a mad dash to get things done.  Buying season for unusual annuals has begun.  "Inventory" is beginning to pile up on the patio and I still haven't been to the best places.  Every night I hook up the appliance dolly and move a few more containers out of the garage.  Eventually it all comes together.

Yesterday was my main man's 14th birthday.  Usually I don't make a big deal out his birthday and as hard as it is to face, the likelihood of him celebrating too many more is not the best.  So I took him to the groomer, posted lots of pictures on Facebook, and brought him to work with me so people could fawn over him.  At some point during the all the birthday frivolity I realized Bloom Day was today.

So last night I sprinted madly around the garden and grabbed a few pictures.  Much of my garden focus is on later season interest so I'm always amazed at how much is in bloom in the spring.  Here is a cross section:

One of my favorite spring activities is to create garden chaos.  Usually I accomplish this by moving plants all over the place.  As a result, not much looks pretty right now but here are a few long shots. 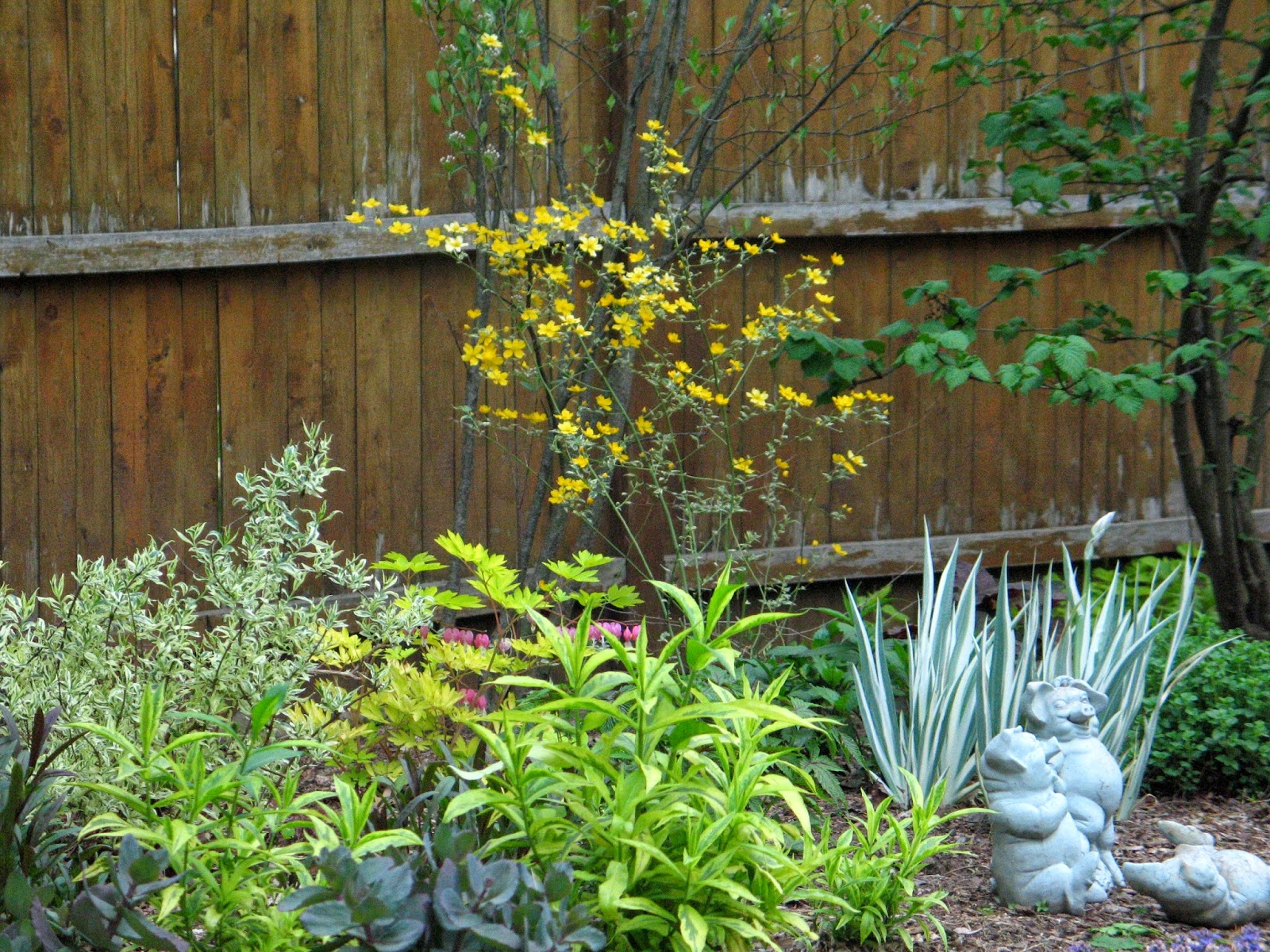 So there you have it!  Much thanks to Carol at May Dreams Gardens for hosting this monthly event and making me go out and stalk photos when I otherwise would not.  Be sure to head over to her site and take a peek at what's in bloom right now all over the globe.