Here in central CT we were gifted with absolutely perfect fall weather this weekend.  After spending the previous week wallowing in self pity over losing the majority of my garden to an early frost, I built a bridge, got over it and was ready to get down to business and let the fall cleanup begin.  You know what "they" say-"make hay while the sun shines".  Good advice.  Who knows what the weather will be like for the upcoming weekends or what alternative activities may develop to distract me?

Leaf removal is a huge part of fall cleanup here.  Sometimes the weekends don't cooperate and I have to take days off from work to get it done.  A couple of years ago three of my neighbors banded together and removed many old trees but the neighborhood is still well shaded. Fortunately the town collects leaves at the curb and I take full advantage. For some reason though, the first pickup this year isn't until the week of November 12th so for now leaves are on the back burner.

Compost manufacturing has never been a strength.  Usually I toss the majority of fall garden waste in with the curb leaves and let the town do the work.  With the extra time this year I decided to chop up most of my container garden waste, add a few bucket loads of pine needles from the driveway, and toss in the bags of grass clippings and leaves from the final mowing of the rear lawns.  Here's what I've got so far,  With any luck, in my one compost bin I may be able to fit about 1% of my leaves and additional garden waste. 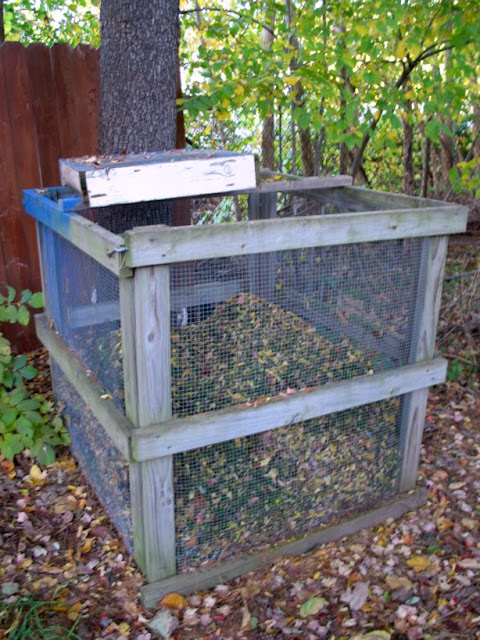 So with leaf pressure off, I decided to focus on cleaning and storing my containers.  Usuallly I clean out the plants after they get frosted (anywhere from late October through mid November) then run around like a nut in December hauling all the pottery to the garage or shed before winter sets in.  Not this year.  At the close of business Sunday night, I had 95% of my pots cleaned out and tucked away in the garage.  In all my years of gardening I have never been so far along with fall pot cleanup.  Not ever! 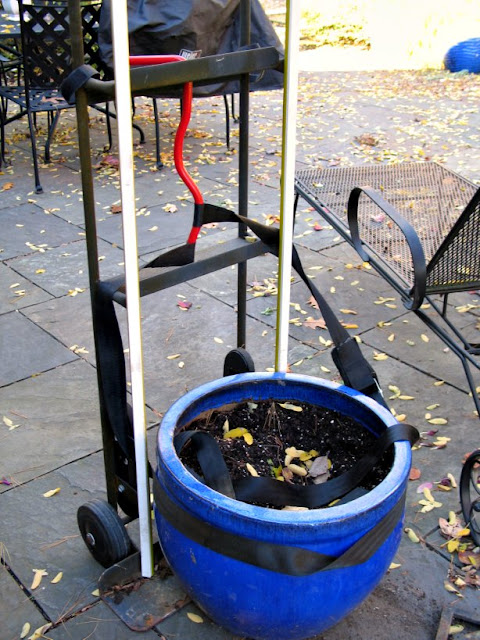 One of my biggest challenges used to be moving heavy pots around the garden.  A few years ago I modified the strap on an appliance dolly so I could use it to grip pots just long enough to get them tipped back and balanced on the rails.  With the exception of a couple of odd balls, I can now move everything I need to move by myself.

Semi annual car washing was also on the agenda.  I like a clean car, really I do, but I don't often have one.  Maybe next spring I'll get to the inside.  Or in the spirit of election year job creation maybe I'll just pay somebody else to do it. 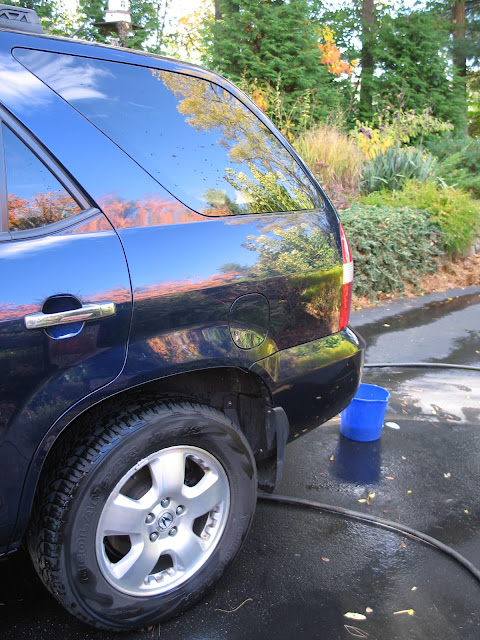 By the end of the weekend things were looking up for the garden.  Not so much for me.  Normally I wouldn't classify myself as a klutz but somehow I managed to slice a finger open with pruning shears, twist and bruise my wrist in a closing gate, and take multiple slams to the shins and an ankle from various weapons of garden destruction.  Be careful out there!

As much as I like a tidy garden, I don't relish fall cleanup.  So is gardening in colder zones.  After spending months and months creating and nurturing it all, in just the equivalent of a couple of weeks you tear everything down and throw it away.

﻿
Despite the early progress, I still have much to do.  Cannas and dahlias have to be dug, dried and stored.  Plants need to be moved and new acquisitions planted.  Next weekend I'll start cutting back the perennials and moving leaves to the curb.  One thing I won't be doing though is moving pots because I'm DONE, DONE, DONE with that nonsense!  Come December I'll be sipping wine under twinkling lights while toasting that early frost.