On Tuesday I was flung back to reality from my first Garden Blogger's Fling. What an adventure it was touring fabulous gardens for three days around Washington DC, MD and VA with an enthusiastic crowd of like minded garden geeks. Meeting some of the people behind the lenses and computers of the best garden blogs in cyberspace was icing on the cake.

Prior to the Fling, I met up with a few long time friends from my old Gardenweb days and spent two days touring gardens in the West Chester, PA area. Five full days of garden touring is a lot even for me but I returned home full of ideas and ready to hit the ground running.

Back in February, I wrote about plans we had to install a patio at this house along with the proposal from one of the garden designers we consulted. You can read that post HERE.

Scott Hokunson of Blue Heron Landscape Design was the second designer we consulted. Both Dave and I were impressed by Scott's design process and his vision for the space. After some revisions back and forth, we ended up with an exciting design that was also surprisingly budget friendly. 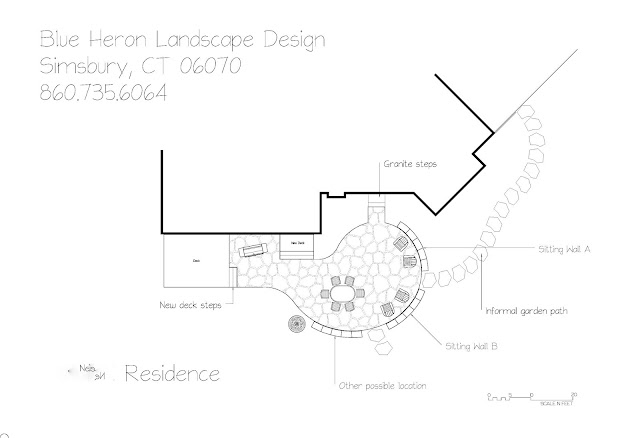 At just a bit over 750 square feet, this patio with be about 50% larger than the one I had at my old house. We've chosen irregular blue stone to reflect the casual, country feel of our home. The final design does not include sitting wall A. Sitting walls were one of my wish list items. That extra rub on the Genie's lamp apparently paid off.
The fountain from my other house is making a comeback. You can see it just to the left of the third sitting wall. I often gaze longingly at pictures of it in my old garden. I'm so glad we made the effort to move it here.

We decided to deep six the original fire pit/fireplace idea. The precast units just weren't doing it for me and custom built was a budget buster. Instead, we will be resurrecting an existing fire pit just off the back lawn at the edge of the woods. Okay, I admit the pictures in this post require the reader to dig deep on the imagination front. But it's going to be great! Trust me.

Speaking of tree removal, kudos to Dave for single handedly felling at least a dozen medium to large trees. Selectively removing trees opened up the space significantly. The backyard now receives a healthy dose of my favorite morning sun. Never fear though, even without these trees a large portion of our two acre lot is still heavily wooded.

So we're off! Sometimes I get tired when I think about all the work that still needs to happen just to reduce the exploded bomb look back here. But I began the process with a vision for this space and am so beyond thrilled to finally see it start to come together.
~Sue~
﻿
Posted by Sue at 11:11 AM

Email ThisBlogThis!Share to TwitterShare to FacebookShare to Pinterest
Labels: patio