Garden season 2015 is over.  Or at least it will be by the end of the upcoming weekend if the forecast for a hard freeze proves accurate.  News of the impending demise sent me scurrying to dust off my camera and grab a few final shots of my late season garden for posterity.  As the sun set and twilight descended, I suddenly felt a great sense of urgency to capture the memories before they fade.

Fall is a glorious season in New England and October is the epitome of fall.  Days are generally still somewhat warm and nights are chilly.  In a good year, foliage colors run the spectrum of greens, oranges, reds and yellows.  By all accounts 2015 is a spectacular year.  I spent last weekend hiking in the Catskills where foliage colors were near peak.  Even after a lifetime of living in New England, foliage ogling never gets old.

Truth be told though, I don't enjoy fall as much as I should because I waste a lot of energy mourning the loss of summer.  I desperately miss the season when the livin' is easy.  I miss being able to get up at 5 AM and not having to turn on a light to see my way to the bathroom.  I miss 8 PM sunsets.  I miss morning coffee and evening cocktails on the patio.  I miss bare feet.  I miss farm dinners.  I miss the flexibility to hike after work.  I miss the screen porch.  I miss mine and my friend's gardens in full glory.  And this fall, as I dismantle the last garden he will ever be part of, I especially miss Nick.

Eventually I'll come around but so will spring.  The weather gurus (who often have trouble predicting the weather tomorrow) are predicting a warmer than usual winter for the northeast.  I'll take it!  But I'll also believe it when I see it.  So without further adieu, here is what I offer up for Bloom Day.

Impatiens.  Call them what you will...ubiquitous, pedestrian, etc.  I call them staples in my garden that, for a couple of bucks a plant, bloom their fool heads off from May until frost.  I use them in containers and I plant them in the ground.  They are the bomb.


Variegated Phlox varieties.  They start blooming in August.  A bit of dead heading keeps the flowers coming until frost.


Many Calibrachoa varieties peter out here by mid September due to shifting shadows and shorter days.  A few persist. 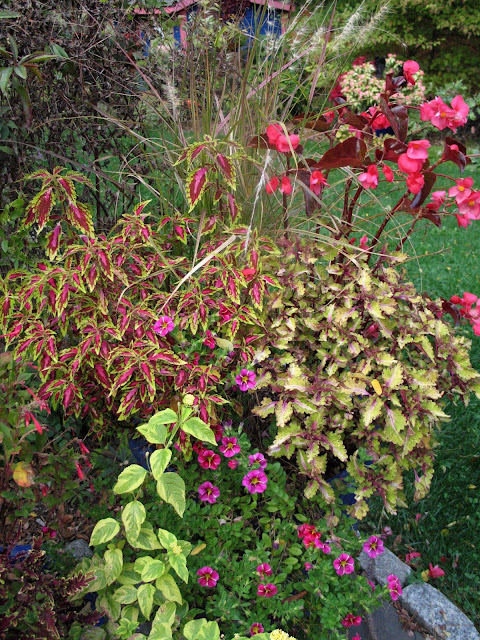 Every year I become more enamored with Dragon Wing Begonias.

I am especially enamored with these Whopper Red Bronze Leaf varieties. 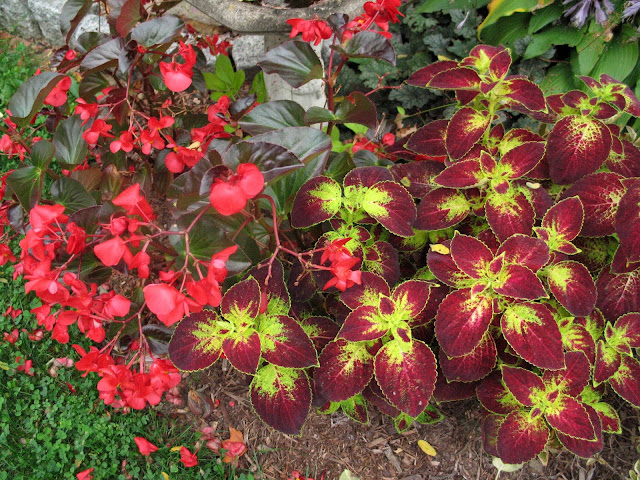 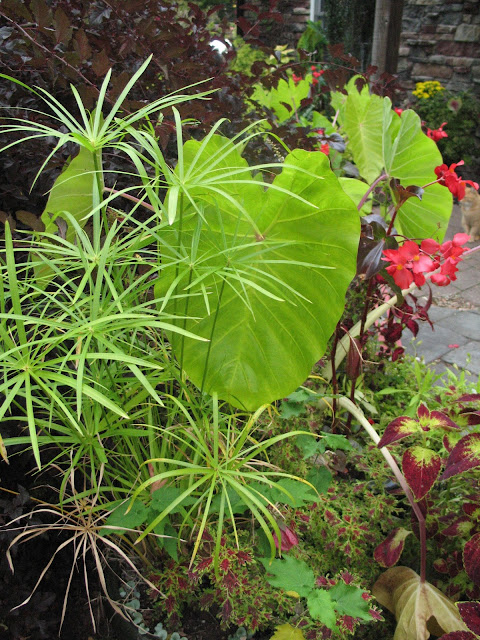 I had high hopes for these Matchstick Mums but they have not proven to be vigorous in my garden.  This one is barely holding on. 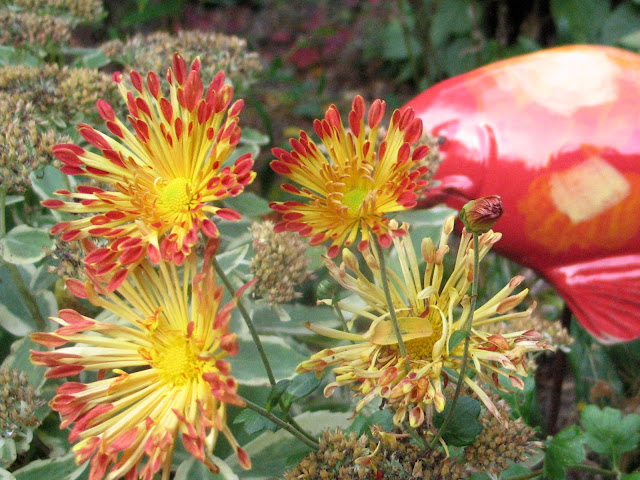 I'm fine with Corydalis lutea anywhere it chooses to seed. 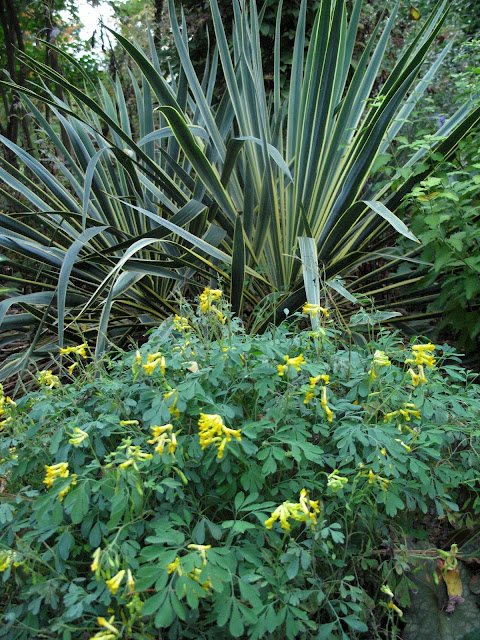 Mr. Conqueror is one of the feral kittens I found under my neighbor's shed on Memorial Day weekend 2014.  I still care for him and one of his sisters but maintain them as outdoor cats (both have been trapped and spay/neutered).  Earlier this summer he disappeared.  After a couple of weeks I figured he likely met his demise-a risk I accept as a condition of his semi-feral status.  Two months later he miraculously reappeared one morning for breakfast and has barely let the food bowl or me out of his sight since.

Coreopsis 'Red Shift' requires way more sun than my garden can provide.  I prop it up with a Peony ring and shear it in late summer.  Usually I don't coddle plants, but for literally months and months of blooms, I'd say this one is worth the effort. 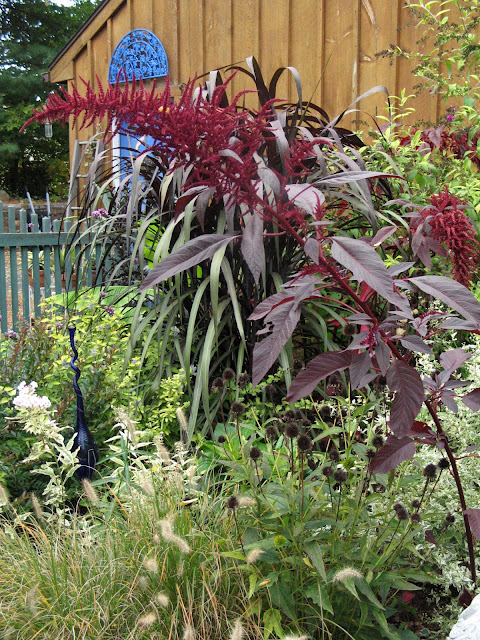 Fountain season is over... 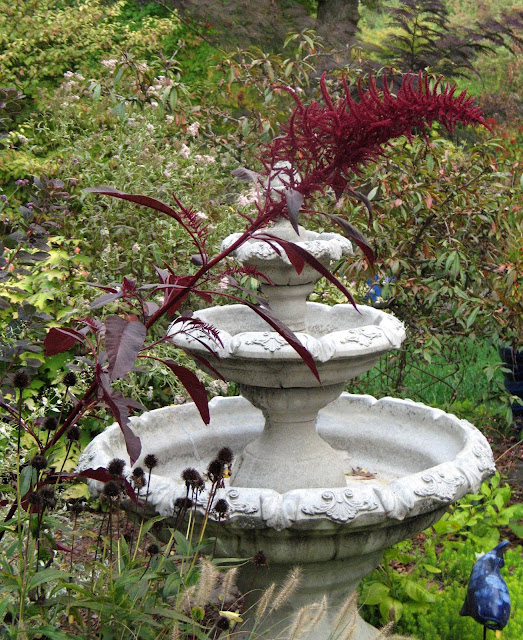 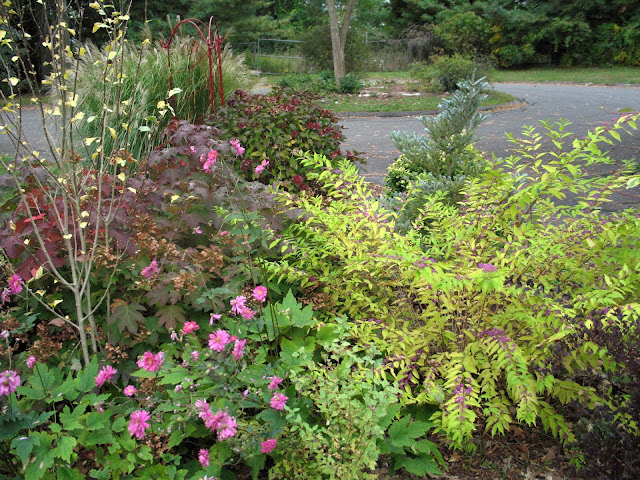 If I had more time (and daylight), I could probably find a few more treasures to share, but much to my dismay, I am short on both.  To check out what gardeners around the world have blooming today, visit Carol at May Dreams Gardens.  Many thanks to Carol for hosting this monthly event!